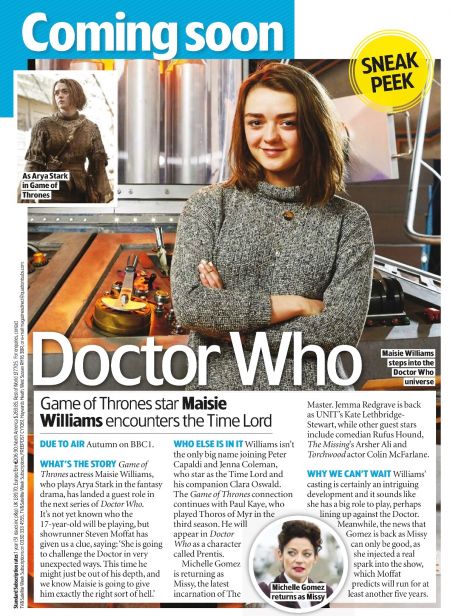 Game of Thrones actress Maisie Williams, who plays Arya Stark in the fantasy drama, has landed a guest role in the next series of Doctor Who. It's not yet known who the 17-year-old will be playing, but showrunner Steven Moffat has given us a clue, saying: She is going to challenge the Doctor in very unexpected ways. This time he might just be out of his depth, and we know Maisie is going to give him exactly the right sort of hell.'

WHO ELSE IS IN IT

Williams isn't the only big name joining Peter Capaldi and Jenna Coleman, who star as the Time Lord and his companion Clara Oswald. The Game of Thrones connection continues with Paul Kaye, who played Thoros of Myr in the third season. He will appear in Doctor Who as a character called Prentis.

Michelle Gomez is returning as Missy, the latest incarnation of The

Master. Jemma Redgrave is back as UNIT's Kate Lethbridge-Stewart, while other guest stars include comedian Rufus Hound, The Missing's Arsher Ali and Torchwood actor Colin McFarlane.

WHY WE CAN'T WAIT

Williams' casting is certainly an intriguing development and it sounds like she has a big role to play, perhaps

lining up against the Doctor. Meanwhile, the news that Gomez is back as Missy can only be good, as she injected a real spark into the show, which Moffat predicts will run for at least another five years.

As Arya Stark in Game of Thrones

Maisie Williams steps into the Doctor Who universe