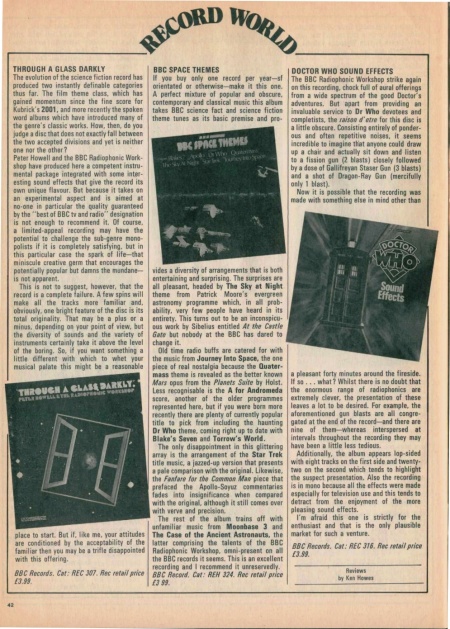 THROUGH A GLASS DARKLY

The evolution of the science fiction record has produced two instantly definable categories thus far. The film theme class, which has gained momentum since the fine score for Kubrick's 2001, and more recently the spoken word albums which have introduced many of the genre's classic works. How, then, do you judge a disc that does not exactly fall between the two accepted divisions and yet is neither one nor the other?

Peter Howell and the BBC Radiophonic Workshop have produced here a competent instrumental package integrated with some interesting sound effects that give the record its own unique flavour. But because it takes on an experimental aspect and is aimed at no-one in particular the quality guaranteed by the "best of BBC tv and radio" designation is not enough to recommend it. Of course, a limited-appeal recording may have the potential to challenge the sub-genre monopolists if it is completely satisfying, but in this particular case the spark of life—that miniscule creative germ that encourages the potentially popular but damns the mundane—is not apparent.

This is not to suggest, however, that the record is a complete failure. A few spins will make all the tracks more familiar and, obviously, one bright feature of the disc is its total originality. That may be a plus or a minus, depending on your point of view, but the diversity of sounds and the variety of instruments certainly take it above the level of the boring. So, if you want something a little different with which to whet your musical palate this might be a reasonable

place to start. But if, like me, your attitudes are conditioned by the acceptability of the familiar then you may be a trifle disappointed with this offering.

If you buy only one record per year—sf orientated or otherwise—make it this one. A perfect mixture of popular and obscure, contemporary and classical music this album takes BBC science fact and science fiction theme tunes as its basic premise and pro-

vides a diversity of arrangements that is both entertaining and surprising. The surprises are all pleasant, headed by The Sky at Night theme from Patrick Moore's evergreen astronomy programme which, in all probability, very few people have heard in its entirety. This turns out to be an inconspicuous work by Sibelius entitled At the Castle Gate but nobody at the BBC has dared to change it.

Old time radio buffs are catered for with the music from Journey Into Space, the one piece of real nostalgia because the (Water-mass theme is revealed as the better known Mars opus from the Planets Suite by Hoist. Less recognisable is the A for Andromeda score, another of the older programmes represented here, but if you were born more recently there are plenty of currently popular title to pick from including the haunting Dr Who theme, coming right up to date with Blake's Seven and Torrow's World.

The only disappointment in this glittering array is the arrangement of the Star Trek title music, a jazzed-up version that presents a pale comparison with the original. Likewise, the Fanfare for the Common Man piece that prefaced the Apollo-Soya commentaries fades into insignificance when compared with the original, although it still comes over with verve and precision.

The rest of the album trains off with unfamiliar music from Moonbase 3 and The Case of the Ancient Astronauts, the latter comprising the talents of the BBC Radiophonic Workshop, omni-present on all the BBC records it seems. This is an excellent recording and I recommend it unreservedly. BBC Record. Cat: REH 324. Rec retail price £3 99.

The BBC Radiophonic Workshop strike again on this recording, chock full of aural offerings from a wide spectrum of the good Doctor's adventures. But apart from providing an invaluable service to Dr Who devotees and completists, the raison d'etre for this disc is a little obscure. Consisting entirely of ponderous and often repetitive noises, it seems incredible to imagine that anyone could draw up a chair and actually sit down and listen to a fission gun (2 blasts) closely followed by a dose of Gallifreyan Staser Gun (3 blasts) and a shot of Dragon-Ray Gun (mercifully only 1 blast).

Now it is possible that the recording was made with something else in mind other than a pleasant forty minutes around the fireside. If so . . what? Whilst there is no doubt that the enormous range of radiophonics are extremely clever, the presentation of these leaves a lot to be desired. For example, the aforementioned gun blasts are all congregated at the end of the record—and there are nine of them—whereas interspersed at intervals throughout the recording they may have been a little less tedious.

Additionally, the album appears lop-sided with eight tracks on the first side and twenty-two on the second which tends to highlight the suspect presentation. Also the recording is in mono because all the effects were made especially for television use and this tends to detract from the enjoyment of the more pleasing sound effects.

I'm afraid this one is strictly for the enthusiast and that is the only plausible market for such a venture.