Doctor Who Tours U.S. During Hiatus 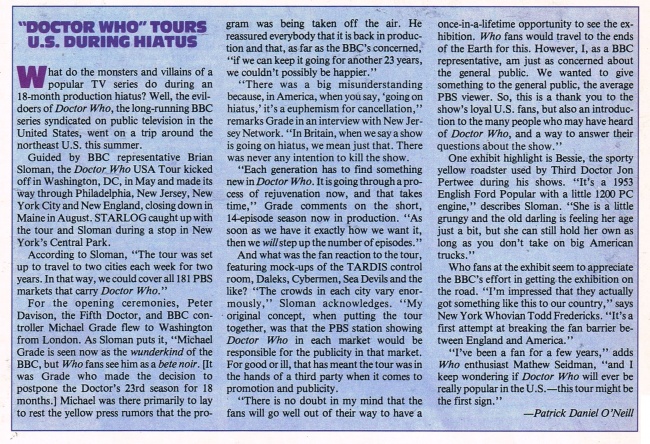 What do the monsters and villains of a popular TV series do during an 18-month production hiatus? Well, the evildoers of Doctor Who, the long-running BBC series syndicated on public television in the United States, went on a trip around the northeast U.S. this summer.

Guided by BBC representative Brian Sloman, the Doctor Who USA Tour kicked off in Washington, DC, in May and made its way through Philadelphia, New Jersey, New York City and New England, closing down in Maine in August. STARLOG caught up with the tour and Sloman during a stop in New York's Central Park.

According to Sloman, "The tour was set up to travel to two cities each week for two years. In that way, we could cover all 181 PBS markets that carry Doctor Who."

For the opening ceremonies, Peter Davison, the Fifth Doctor, and BBC controller Michael Grade flew to Washington from London. As Sloman puts it, "Michael Grade is seen now as the wunderkind of the BBC, but Who fans see him as a bete noir. [It was Grade who made the decision to postpone the Doctor's 23rd season for 18 months.] Michael was there primarily to lay to rest the yellow press rumors that the program was being taken off the air. He reassured everybody that it is back in production and that, as far as the BBC's concerned, "if we can keep it going for another 23 years, we couldn't possibly be happier."

"There was a big misunderstanding because, in America, when you say, 'going on hiatus,' it's a euphemism for cancellation," remarks Grade in an interview with New Jersey Network. "In Britain, when we say a show is going on hiatus, we mean just that. There was never any intention to kill the show.

"Each generation has to find something new in Doctor Who. It is going through a process of rejuvenation now, and that takes time," Grade comments on the short, 14-episode season now in production. "As soon as we have it exactly how we want it, then we will step up the number of episodes."

And what was the fan reaction to the tour, featuring mock-ups of the TARDIS control room, Daleks, Cybermen, Sea Devils and the like? "The crowds in each city vary enormously," Sloman acknowledges. "My original concept, when putting the tour together, was that the PBS station showing Doctor Who in each market would be responsible for the publicity in that market. For good or ill, that has meant the tour was in the hands of a third party when it comes to promotion and publicity.

"There is no doubt in my mind that the fans will go well out of their way to have a once-in-a-lifetime opportunity to see the exhibition. Who fans would travel to the ends of the Earth for this. However, I, as a BBC representative, am just as concerned about the general public. We wanted to give something to the general public, the average PBS viewer. So, this is a thank you to the show's loyal U.S. fans, but also an introduction to the many people who may have heard of Doctor Who, and a way to answer their questions about the show."

One exhibit highlight is Bessie, the sporty yellow roadster used by Third Doctor Jon Pertwee during his shows. "It's a 1953 English Ford Popular with a little 1200 PC engine," describes Sloman. "She is a little grungy and the old darling is feeling her age just a bit, but she can still hold her own as long as you don't take on big American trucks."

Who fans at the exhibit seem to appreciate the BBC's effort in getting the exhibition on the road. "I'm impressed that they actually got something like this to our country," says New York Whovian Todd Fredericks. "It's a first attempt at breaking the fan barrier between England and America."

"I've been a fan for a few years," adds Who enthusiast Mathew Seidman, "and I keep wondering if Doctor Who will ever be really popular in the U.S.—this tour might be the first sign."