Doctor Who and Kennedy. Who said Proms were elitist? 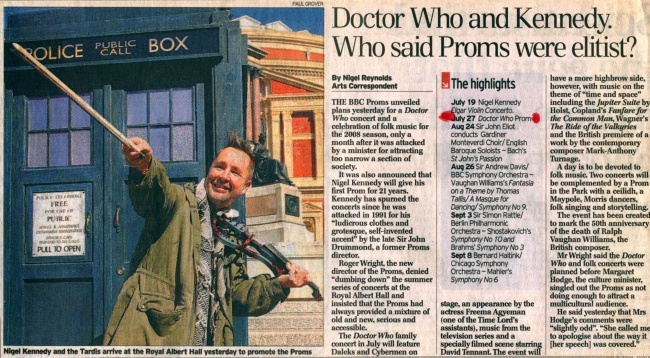 THE BBC Proms unveiled plans yesterday for a Doctor Who concert and a celebration of folk music for the 2008 season, only a month after it was attacked by a minister for attracting too narrow a section of society.

It was also announced that Nigel Kennedy will give his first Prom for 21 years. Kennedy has spurned the concerts since he was attacked in 1991 for his "ludicrous clothes and grotesque, self-invented accent" by the late Sir John Drummond, a former Proms director.

Roger Wright, the new director of the Proms, denied "dumbing down" the summer series of concerts at the Royal Albert Hall and insisted that the Proms had always provided a mixture of old and new, serious and accessible.

The Doctor Who family concert in July will feature Daleks and Cybermen on stage, an appearance by the actress Freema Agyeman (one of the Time Lord's assistants), music from the television series and a specially filmed scene starring David Tennant The event will have a more highbrow side, 11 however, with music on the theme of "time and space" including the Jupiter Suite by Hoist, Copland's Fanfare for the Common Man, Wagner's The Ride of the Valkyries and the British premiere of a work by the contemporary composer Mark-Anthony Turnage.

A day is to be devoted to folk music. Two concerts will be complemented by a Prom in the Park with a ceilidh, a Maypole, Morris dancers, folk singing and storytelling.

The event has been created to mark the 50th anniversary of the death of Ralph Vaughan Williams, the British composer.

Mr Wright said the Doctor Who and folk concerts were planned before Margaret Hodge, the culture minister, singled out the Proms as not doing enough to attract a multicultural audience.

He said yesterday that Mrs Hodge's comments were "slightly odd". "She called me to apologise about the way it [her speech] was covered."