Doctor Who and the (quiz) master 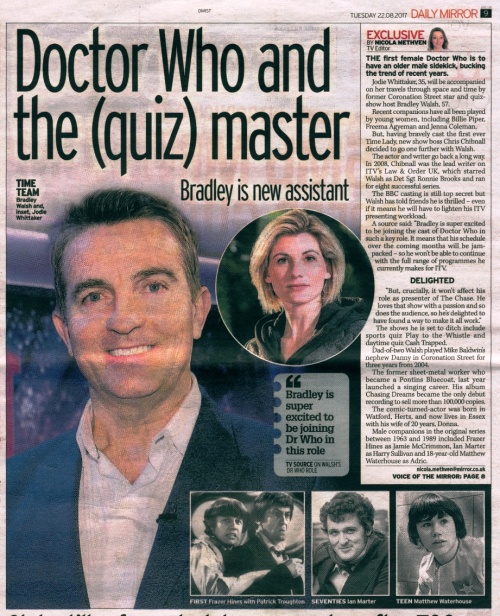 THE first female Doctor Who is to have an older male sidekick, bucking the trend of recent years.

Jodie Whittaker, 35, will be accompanied on her travels through space and time by former Coronation Street star and quiz-show host Bradley Walsh, 57.

Recent companions have all been played by young women, including Billie Piper, Freema Agyeman and Jenna Coleman.

But, having bravely cast the first ever Time Lady, new show boss Chris Chibnall decided to go one further with Walsh.

The actor and writer go back a long way. In 2008, Chibnall was the lead writer on ITV's Law & Order UK, which starred Walsh as Det Sgt Ronnie Brooks and ran for eight successful series.

The BBC casting is still top secret but Walsh has told friends he is thrilled - even if it means he will have to lighten his ITV presenting workload.

A source said: "Bradley is super excited to be joining the cast of Doctor Who in such a key role. It means that his schedule over the coming months will be jam-packed - so he won't be able to continue with the full range of programmes he currently makes for ITV.

"But, crucially, it won't affect his role as presenter of The Chase. He loves that show with a passion and so does the audience, so he's delighted to have found a way to make it all work." The shows he is set to ditch include sports quiz Play to the Whistle and daytime quiz Cash Trapped.

The former sheet-metal worker who became a Pontins Bluecoat, last year launched a singing career. His album Chasing Dreams became the only debut recording to sell more than 100,000 copies.

The comic-turned-actor was born in Watford, Herts, and now lives in Essex with his wife of 20 years, Donna.

Male companions in the original series between 1963 and 1989 included Frazer Hines as Jamie McCrimmon, Ian Marter as Harry Sullivan and 18-year-old Matthew Waterhouse as Adric.