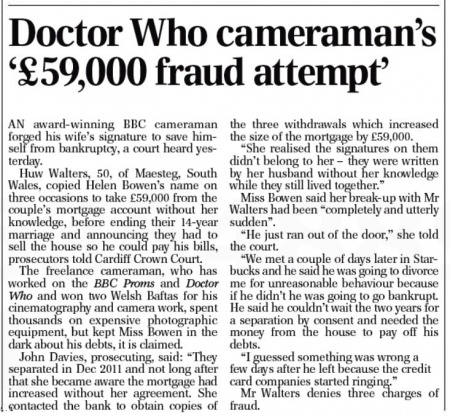 AN award-winning BBC cameraman forged his wife's signature to save himself from bankruptcy, a court heard yesterday.

Huw Walters, 50, of Maesteg, South Wales, copied Helen Bowen's name on three occasions to take £59,000 from the couple's mortgage account without her knowledge, before ending their 14-year marriage and announcing they had to sell the house so he could pay his bills, prosecutors told Cardiff Crown Court.

The freelance cameraman, who has worked on the BBC Proms and Doctor

Who and won two Welsh Baftas for his cinematography and camera work, spent thousands on expensive photographic equipment, but kept Miss Bowen in the dark about his debts, it is claimed.

John Davies, prosecuting, said: "They separated in Dec 2011 and not long after that she became aware the mortgage had increased without her agreement. She contacted the bank to obtain copies of the three withdrawals which increased the size of the mortgage by £59,000.

"She realised the signatures on them didn't belong to her – they were written by her husband without her knowledge while they still lived together."

Miss Bowen said her break-up with Mr Walters had been "completely and utterly sudden".

"He just ran out of the door," she told the court.

"We met a couple of days later in Starbucks and he said he was going to divorce me for unreasonable behaviour because if he didn't he was going to go bankrupt. He said he couldn't wait the two years for a separation by consent and needed the money from the house to pay off his debts.

"I guessed something was wrong a few days after he left because the credit card companies started ringing."