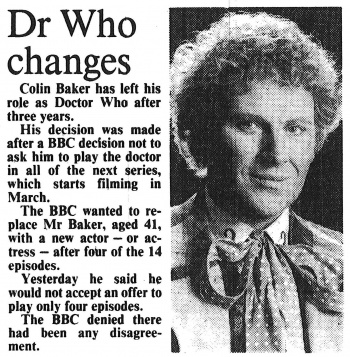 Colin Baker has left his role as Doctor Who after three years.

His decision was made after a BBC decision not to ask him to play the doctor in all of the next series, which starts filming in March.

The BBC wanted to replace Mr Baker, aged 41, with a new actor — or actress after four of the 14 episodes.

Yesterday he said he would not accept an offer to play only four episodes.

The BBC denied there had been any disagreement.