Doctor Who convention coming back to Clarksville 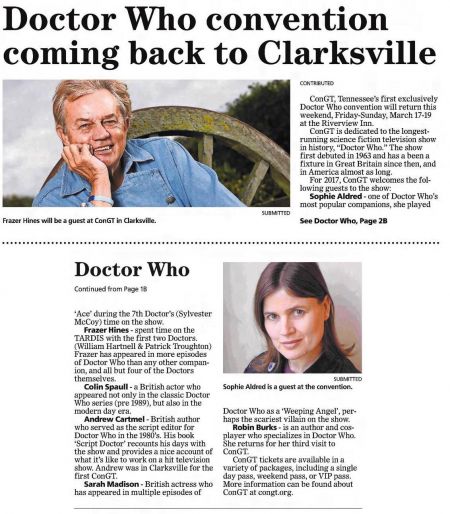 ConGT is dedicated to the longest-running science fiction television show in history, "Doctor Who." The show first debuted in 1963 and has a been a fixture in Great Britain since then, and in America almost as long.

For 2017, ConGT welcomes the following guests to the show:

Sophie Aldred - one of Doctor Who's most popular companions, she played 'Ace' during the 7th Doctor's (Sylvester McCoy) time on the show.

Frazer Hines - spent time on the TARDIS with the first two Doctors. (William Hartnell & Patrick Troughton) Frazer has appeared in more episodes of Doctor Who than any other companion, and all but four of the Doctors themselves.

Colin Spaull - a British actor who appeared not only in the classic Doctor Who series (pre 1989), but also in the modern day era.

Andrew Cartmel - British author who served as the script editor for Doctor Who in the 1980's. His book 'Script Doctor' recounts his days with the show and provides a nice account of what it's like to work on a hit television show. Andrew was in Clarksville for the first ConGT.

Sarah Madison - British actress who has appeared in multiple episodes of Doctor Who as a 'Weeping Angel', perhaps the scariest villain on the show.

Robin Burks - is an author and cos-player who specializes in Doctor Who. She returns for her third visit to ConGT.

ConGT tickets are available in a variety of packages, including a single day pass, weekend pass, or VIP pass. More information can be found about ConGT at congt.org.

Caption: Frazer Hines will be a guest at ConGT in Clarksville.

Caption: Sophie Aldred is a guest at the convention.