Doctor Who dials up a visit to the 1990s 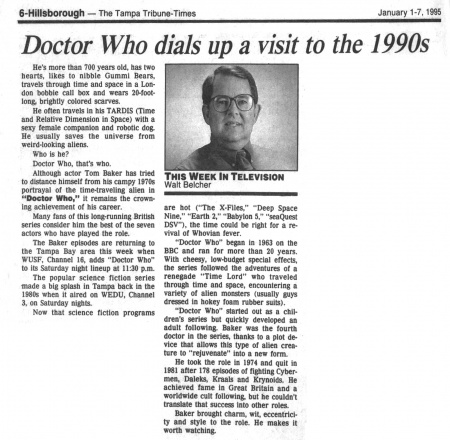 He often travels in his TARDIS (Time and Relative Dimension in Space) with a sexy female companion and robotic dog. He usually saves the universe from weird-looking aliens.

Although actor Tom Baker has tried to distance himself from his campy 1970s portrayal of the time-traveling alien in "Doctor Who," it remains the crowning achievement of his career.

Many fans of this long-running British series consider him the best of the seven actors who have played the role.

The Baker episodes are returning to the Tampa Bay area this week when WUSF, Channel 16, adds "Doctor Who" to its Saturday night lineup at 11:30 p.m.

The popular science fiction series made a big splash in Tampa back in the 1980s when it aired on WEDU, Channel 3, on Saturday nights.

Now that science fiction programs are hot ("The X-Files," "Deep Space Nine," "Earth 2," "Babylon 5," "seaQuest DSV"), the time could be right for a revival of Whovian fever.

"Doctor Who" began in 1963 on the BBC and ran for more than 20 years. With cheesy, low-budget special effects, the series followed the adventures of a renegade "Time Lord" who traveled through time and space, encountering a variety of alien monsters (usually guys dressed in hokey foam rubber suits).

"Doctor Who" started out as a children's series but quickly developed an adult following. Baker was the fourth doctor in the series, thanks to a plot device that allows this type of alien creature to "rejuvenate" into a new form.

He took the role in 1974 and quit in 1981 after 178 episodes of fighting Cybermen, Daleks, Kraals and Krynoids. He achieved fame in Great Britain and a worldwide cult following, but he couldn't translate that success into other roles.

Baker brought charm, wit, eccentricity and style to the role. He makes it worth watching.