Doctor Who ends its season on a sober note 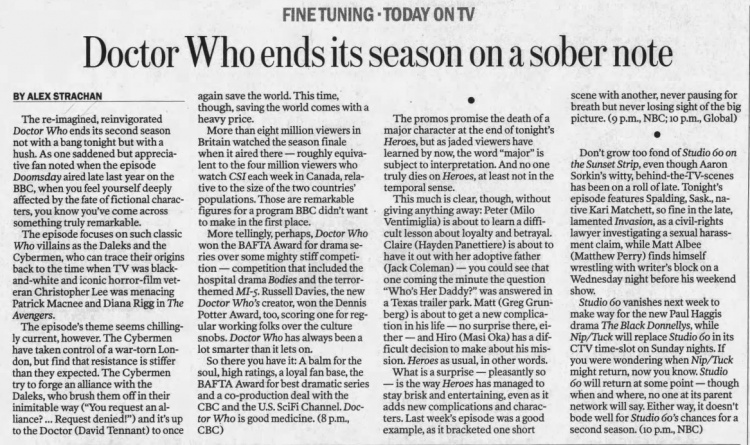 The re-imagined, reinvigorated Doctor Who ends its second season not with a bang tonight but with a hush. As one saddened but appreciative fan noted when the episode Doomsday aired late last year on the BBC, when you feel yourself deeply affected by the fate of fictional characters, you know you've come across something truly remarkable.

The episode focuses on such classic Who villains as the Daleks and the Cybermen, who can trace their origins back to the time when TV was black-and-white and iconic horror-film veteran Christopher Lee was menacing Patrick Macnee and Diana Rigg in The Avengers.

The episodes theme seems chillingly current, however. The Cybermen have taken control of a war-torn London, but find that resistance is stiffer than they expected. The Cybermen try to forge an alliance with the Daleks, who brush them off in their inimitable way ("You request an alliance? ... Request denied!") and it's up to the Doctor (David Tennant) to once again save the world. This time, though, saving the world comes with a heavy price.

More than eight million viewers in Britain watched the season finale when it aired there — roughly equivalent to the four million viewers who watch CSI each week in Canada, relative to the size of the two countries' populations. Those are remarkable figures for a program BBC didn't want to make in the first place.

More tellingly, perhaps, Doctor Who won the BAFTA Award for drama series over some mighty stiff competition — competition that included the hospital drama Bodies and the terror-themed MI-5. Russell Davies, the new Doctor Who's creator, won the Dennis Potter Award, too, scoring one for regular working folks over the culture snobs. Doctor Who has always been a lot smarter than it lets on.

So there you have it: A balm for the soul, high ratings, a loyal fan base, the BAFTA Award for best dramatic series and a co-production deal with the CBC and the U.S. SciFi Channel. Doctor Who is good medicine. (8 p.m., CBC)