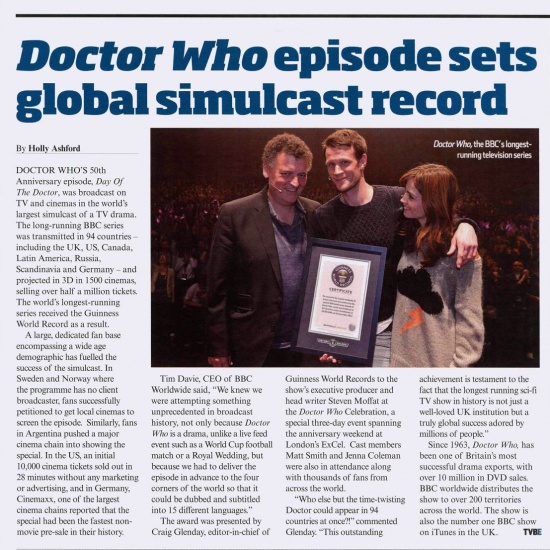 DOCTOR WHO'S 50th Anniversary episode, Day Of The Doctor, was broadcast on TV and cinemas in the world's largest simulcast of a TV drama. The long-running BBC series was transmitted in 94 countries — including the UK, US, Canada, Latin America, Russia, Scandinavia and Germany — and projected in 3D in 1500 cinemas, selling over half a million tickets. The world's longest-running series received the Guinness World Record as a result.

A large, dedicated fan base encompassing a wide age demographic has fuelled the success of the simulcast. In Sweden and Norway where the programme has no client broadcaster, fans successfully petitioned to get local cinemas to screen the episode. Similarly, fans in Argentina pushed a major cinema chain into showing the special. In the US, an initial 10,000 cinema tickets sold out in 28 minutes without any marketing or advertising, and in Germany, Cinemaxx, one of the largest cinema chains reported that the special had been the fastest non-movie pre-sale in their history.

Tim Davie, CEO of BBC Worldwide said, "We knew we were attempting something unprecedented in broadcast history, not only because Doctor Who is a drama, unlike a live feed event such as a World Cup football match or a Royal Wedding, but because we had to deliver the episode in advance to the four corners of the world so that it could be dubbed and subtitled into 15 different languages."

The award was presented by Craig Glenday, editor-in-chief of Guinness World Records to the show's executive producer and head writer Steven Moffat at the Doctor Who Celebration, a special three-day event spanning the anniversary weekend at London's ExCel. Cast members Matt Smith and Jenna Coleman were also in attendance along with thousands of fans from across the world.

"Who else but the time-twisting Doctor could appear in 94 countries at once?!" commented Glenday. "This outstanding achievement is testament to the fact that the longest running sci-fi TV show in history is not just a well-loved UK institution but a truly global success adored by millions of people."

Since 1963, Doctor Who, has been one of Britain's most successful drama exports, with over 10 million in DVD sales. BBC worldwide distributes the show to over 200 territories across the world. The show is also the number one BBC show on iTunes in the UK.