Doctor Who fans know their stuff 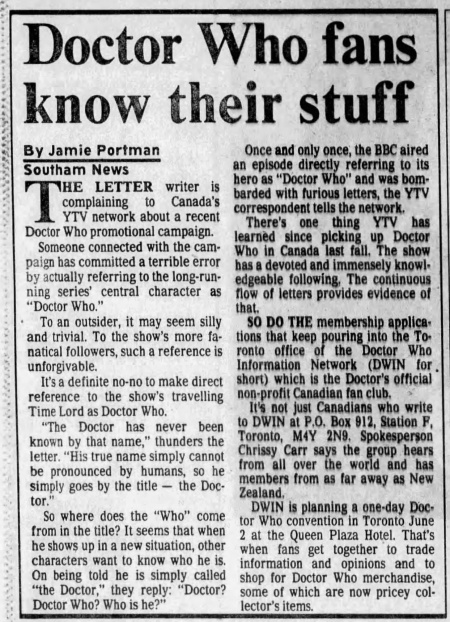 THE LETTER writer is complaining to Canada's YTV network about a recent Doctor Who promotional campaign.

Its a definite no-no to make direct reference to the show's travelling Time Lord as Doctor Who.

"The Doctor has never been known by that name," thunders the letter. "His true name simply cannot be pronounced by humans, so he simply goes by the title — the Doctor."

So where does the Who come from in the title? It seems that when he shows up in a new situation, other characters want to know who he is. On being told he is simply called "the Doctor," they reply: "Doctor? Doctor Who? Who is he?"

Once and only once, the BBC aired an episode directly referring to its hero as "Doctor Who and was bombarded with furious letters, the YTV correspondent tells the network.

There's one thing YTV has learned since picking up Doctor Who in Canada last fall. The show has a devoted and immensely knowledgeable following, The continuous flow of letters provides evidence of that.

SO DO THE membership applications that keep pouring into the Toronto office of the Doctor Who Information Network (DWIN for short) which is the Doctor's official non•protit Canadian tan club.

It's not Just Canadians who write to DWIN at P.O. Box 912, Station F, Toronto, MIY 2N9. Spokesperson Chrissy Carr says the group hears from all over the world and has members from as tar away as New Zealand.

DWIN is planning a one-day Doctor Who convention in Toronto June 2 at the Queen Plaza Hotel. That's when fans get together to trade information and opinions and to shop for Doctor Who merchandise, some of which are now pricey collector's items.