Doctor Who heading for a change of Doctor 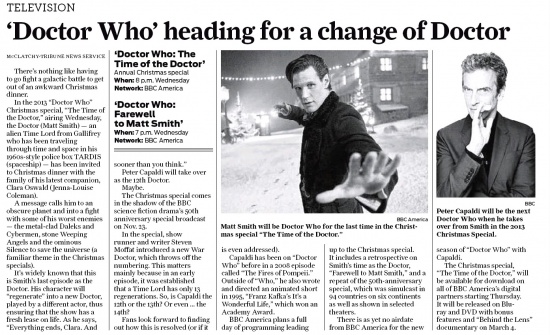 There's nothing like having to go fight a galactic battle to get out of an awkward Christmas dinner.

BBC America Matt Smith will be Doctor Who for the last time in the Christmas special "The Time of the Doctor."

In the 2013 "Doctor Who" Christmas special, "The Time of the Doctor," airing Wednesday, the Doctor (Matt Smith) — an alien Time Lord from Gallifrey who has been traveling through time and space in his 1960s-style police box TARDIS (spaceship) — has been invited to Christmas dinner with the family of his latest companion, Clara Oswald (Jenna-Louise Coleman).

A message calls him to an obscure planet and into a fight with some of his worst enemies — the metal-clad Daleks and Cybermen, stone Weeping Angels and the ominous Silence to save the universe (a familiar theme in the Christmas specials).

It's widely known that this is Smith's last episode as the Doctor. His character will "regenerate" into a new Doctor, played by a different actor, thus ensuring that the show has a fresh lease on life. As he says, "Everything ends, Clara. And sooner than you think."

Peter Capaldi will take over as the 12th Doctor. Maybe. The Christmas special comes in the shadow of the BBC science fiction drama's 50th anniversary special broadcast on Nov. 23.

In the special, show runner and writer Steven Moffat introduced a new War Doctor, which throws off the numbering. This matters mainly because in an early episode, it was established that a Time Lord has only 13 regenerations. So, is Capaldi the 12th or the 13th? Or even … the 14th?

Fans look forward to finding out how this is resolved (or if it is even addressed).

Capaldi has been on "Doctor Who" before in a 2008 episode called "The Fires of Pompeii." Outside of "Who," he also wrote and directed an animated short in 1995, "Franz Kafka's It's a Wonderful Life," which won an Academy Award.

BBC America plans a full day of programming leading up to the Christmas special. It includes a retrospective on Smith's time as the Doctor, "Farewell to Matt Smith," and a repeat of the 50th-anniversary special, which was simulcast in 94 countries on six continents as well as shown in selected theaters.

There is as yet no airdate from BBC America for the new season of "Doctor Who" with Capaldi.

The Christmas special, "The Time of the Doctor," will be available for download on all of BBC America's digital partners starting Thursday. It will be released on Blu-ray and DVD with bonus features and "Behind the Lens" documentary on March 4.