Doctor Who in Combat 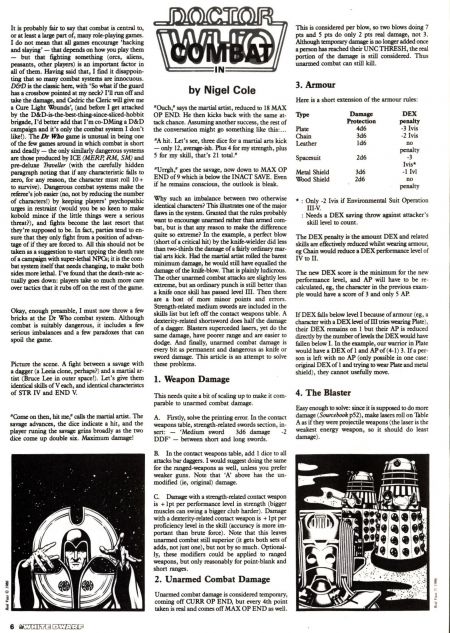 It is probably fair to say that combat is central to, or at least a large part of, many role-playing games. I do not mean that all games encourage 'hacking and slaying' — that depends on how you play them — but that fighting something (ores, aliens, peasants, other players) is an important factor in all of them. Having said that, I find it disappointing that so many combat systems are innocuous. D&D is the classic here, with 'So what if the guard has a crossbow pointed at my neck? I'll run off and take the damage, and Cedric the Cleric will give me a Cure Light Wounds', (and before I get attacked by the D&D-is-the-best-thing-since-sliced-hobbit brigade, I'd better add that I'm co-DMing a D&D campaign and it's only the combat system I don't like!). The Dr Who game is unusual in being one of the few games around in which combat is short and deadly — the only similarly dangerous systems are those produced by ICE (MERP RM, SM) and pre-deluxe Traveller (with the carefully hidden paragraph noting that if any characteristic falls to zero, for any reason, the character must roll 10 + to survive). Dangerous combat systems make the referee's job easier (no, not by reducing the number of characters!) by keeping players' psychopathic urges in restraint (would you be so keen to make kobold mince if the little things were a serious threat?), and fights become the last resort that they're supposed to be. In fact, parties tend to ensure that they only fight from a position of advantage of if they are forced to. All this should not be taken as a suggestion to start upping the death rate of a campaign with super-lethal NPCs; it is the combat system itself that needs changing, to make both sides more lethal. I've found that the death-rate actually goes down: players take so much more care over tactics that it rubs off on the rest of the game.

Okay, enough preamble, I must now throw a few bricks at the Dr Who combat system. Although combat is suitably dangerous, it includes a few serious imbalances and a few paradoxes that can spoil the game.

Picture the scene. A fight between a savage with a dagger (a Leeia clone, perhaps?) and a martial artist (Bruce Lee in outer space!). Let's give them identical skills of V each, and identical characteristcs of STR IV and END V.

"Come on then, hit me," calls the martial artist. The savage advances, the dice indicate a hit, and the player tuning the savage grins broadly as the two dice come up double six. Maximum damage!

"Ouch," says the martial artist, reduced to 18 MAX OP END. He then kicks back with the same attack chance. Assuming another success, the rest of the conversation might go something like this:...

"Urrgh," goes the savage, now down to MAX OP END of 9 which is below the INACT SAVE. Even if he remains conscious, the outlook is bleak.

Why such an imbalance between two otherwise identical characters? This illustrates one of the major flaws in the system. Granted that the rules probably want to encourage unarmed rather than armed combat, but is that any reason to make the difference quite so extreme? In the example, a perfect blow (short of a critical hit) by the knife-wielder did less than twd-thirds the damage of a fairly ordinary martial arts kick. Had the martial artist rolled the barest minimum damage, he would still have equalled the damage of the knife-blow. That is plainly ludicrous. The other unarmed combat attacks are slightly less extreme, but an ordinary punch is still better than a knife once skill has passed level III. Then there are a host of more minor points and errors. Strength-related medium swords are included in the skills list but left off the contact weapons table. A dexterity-related shortsword does half the damage of a dagger. Blasters superceded lasers, yet do the same damage, have poorer range and are easier to dodge. And finally, unarmed combat damage is every bit as permanent and dangerous as knife or sword damage. This article is an attempt to solve these problems.

This needs quite a bit of scaling up to make it comparable to unarmed combat damage.

B. In the contact weapons table, add 1 dice to all attacks bar daggers. I would suggest doing the same for the ranged-weapons as well, unless you prefer weaker guns. Note that 'A' above has the unmodified (ie, original) damage.

C. Damage with a strength-related contact weapon is + 1pt per performance level in strength (bigger muscles can swing a bigger club harder). Damage with a dexterity-related contact weapon is + 1pt per proficiency level in the skill (accuracy is more important than brute force). Note that this leaves unarmed combat still superior (it gets both sets of adds, not just one), but not by so much. Optionally, these modifiers could be applied to ranged weapons, but only reasonably for point-blank and short ranges.

Unarmed combat damage is considered temporary, coming off CURR OP END, but every 4th point taken is real and comes off MAX OP END as well.

This is considered per blow, so two blows doing 7 pts and 5 pts do only 2 pts real damage, not 3. Although temporary damage is no longer added once a person has reached their UNC THRESH, the real portion of the damage is still considered. Thus unarmed combat can still kill.

Here is a short extension of the armour rules:

The DEX penalty is the amount DEX and related skills are effectively reduced whilst wearing armour, eg Chain would reduce a DEX performance level of IV to II.

The new DEX score is the minimum for the new performance level, and AP will have to be recalculated, eg, the character in the previous example would have a score of 3 and only 5 AP.

If DEX falls below level I because of armour (eg, a character with a DEX level of III tries wearing Plate), their DEX remains on 1 but their AP is reduced directly by the number of levels the DEX would have fallen below I. In the example, our warrior in Plate would have a DEX of 1 and AP of (4-1) 3. If a person is left with no AP (only possible in one case: original DEX of 1 and trying to wear Plate and metal shield), they cannot usefully move.

Easy enough to solve: since it is supposed to do more damage (Sourcebook p52), make lasers roll on Table A as if they were projectile weapons (the laser is the weakest energy weapon, so it should do least damage).