Doctor Who is many things, but dull isn't one of them 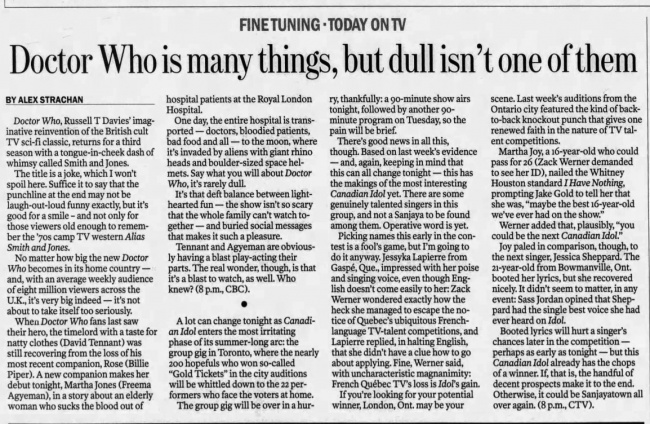 Doctor Who, Russell T Davies' imaginative reinvention of the British cult TV sci-fi classic, returns for a third season with a tongue-in-cheek dash of whimsy called Smith and Jones.

The title is a joke, which I won't spoil here. Suffice it to say that the punchline at the end may not be laugh-out-loud funny exactly, but it's good for a smile - and not only for those viewers old enough to remember the 'dos camp TV western Alias Smith and Jones.

No matter how big the new Doctor Who becomes in its home country — and, with an average weekly audience of eight million viewers across the U.K., it's very big indeed — it's not about to take itself too seriously.

When Doctor Who fans last saw their hero, the timelord with a taste for natty clothes (David Tennant) was still recovering from the loss of his most recent companion, Rose (Billie Piper). A new companion makes her debut tonight, Martha Jones (Freema Agyeman), in a story about an elderly woman who sucks the blood out of hospital patients at the Royal London Hospital.

One day, the entire hospital is transported — doctors, bloodied patients, bad food and all — to the moon. where its invaded by aliens with giant rhino heads and boulder-sized space helmets. Say what you will about Doctor Who, its rarely dull.

It's that deft balance between lighthearted fun — the show isn't so scary that the whole family can't watch together — and buried social messages that makes it such a pleasure.

Tennant and Agyeman are obviously having a blast play-acting their parts. The real wonder, though, is that it's a blast to watch, as well. Who knew? (8 p.m., CBC).