Doctor Who lands in North Carolina 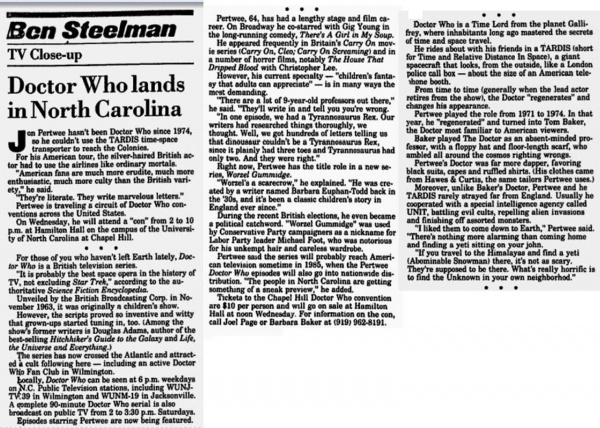 Jon Pertwee hasn't been Doctor Who since 1974, so he couldn't use the TARDIS time-space transporter to reach the Colonies. For his American tour. the silver-haired British actor had to use the airlines like ordinary mortals

"American fans are much more erudite, much more enthusiastic, much more culty than the British variety," he said.

"They're literate. They write marvelous letters." Pertwee is traveling a circuit of Doctor Who conventions across the United States.

On Wednesday, he will attend a "con" from 2 to 10 p.m. at Hamilton Hall on the campus of the University of North Carolina at Chapel Hill.

For those of you who haven't left Earth lately, Doctor Who is a British television series.

It is probably the best space opera in the history of TV. not excluding Star Trek," according to the authoritative Science Fiction Encyclopedia.

Unveiled by the British Broadcasting Corp. in November 1963, it was originally a children's show.

However, the scripts proved so inventive and witty that grown-ups started tuning in, too. Among the show's former writers is Douglas Adams, author of the best-selling Hitchhiker's Guide to the Galaxy and Life, the Universe and Everything.)

The series has now crossed the Atlantic and attracted a cult following here — including an active Doctor Who Fan Club in Wilmington.

Locally, Doctor Who can be seen at 6 p.m. weekdays on N.C. Public Television stations, including WIJNJ-39 in Wilmington and WUNM-19 in Jacksonville. A complete 90-minute Doctor Who serial is also broadcast on public TV from 2 to 3:30 p.m. Saturdays. Episodes starring Pertwee are now being featured.

Pertwee, 64, has had a lengthy stage and film career. On Broadway he co-starred with Gig Young in the long-running comedy, There's A Girl in My Soup.

He appeared frequently in Britain's Carry On movie series (Carry On, Cleo; Carry On Screaming) and in a number of horror films, notably The House That Dripped Blood with Christopher Lee.

However, his current specialty — "children's fantasy that adults can appreciate" — is in many ways the most demanding.

"There are a lot of 9-year-old professors out there," he said. "They'll write in and tell you you're wrong.

Right now, Pertwee has the title role in a new series, Worzel Gummidge.

"Worzel's a scarecrow," he explained. "He was created by a writer named Barbara Euphan-Todd back in the '30s, and it's been a classic children's story in England ever since."

During the recent British elections, he even became a political catchword. "Worzel Gummidge" was used by Conservative Party campaigners as a nickname for Labor Party leader Michael Foot, who was notorious for his unkempt hair and careless wardrobe.

Pertwee said the series will probably reach American television sometime in 1985, when the Pertwee Doctor Who episodes will also go into nationwide distribution. "The people in North Carolina are getting something of a sneak preview," he added.

Tickets to the Chapel Hill Doctor Who convention are $10 per person and will go on sale at Hamilton Hall at noon Wednesday For information on the con, call Joel Page or Barbara Baker at (919) 962-8191.

Doctor Who is a Time Lord from the planet Gallifrey, where inhabitants long ago mastered the secrets of time and space travel.

He rides about with his friends in a TARDIS (short for Time and Relative Distance In Space), a giant spacecraft that looks, from the outside, like a London police call box — about the size of an American telephone booth.

From time to time (generally when the lead actor retires from the show). the Doctor "regenerates" and changes his appearance.

Pertwee played the role from 1971 to 1974. In that year, he "regenerated" and turned into Tom Baker, the Doctor most familiar to American viewers.

Baker played The Doctor as an absent-minded professor, with a floppy hat and floor-length scarf, who ambled all around the cosmos righting wrongs.

"I liked them to come down to Earth," Pertwee said. "There's nothing more alarming than coming home and finding a yeti sitting on your John.

"If you travel to the Himalayas and find a yeti (Abominable Snowman) there, it's not as scary. They're supposed to be there. What's really horrific is to find the Unknown in your own neighborhod."