Doctor Who nearly flew in a bubble 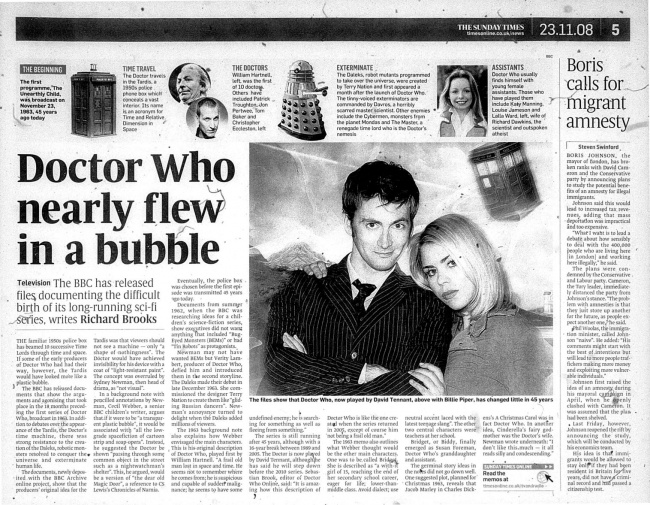 THE familiar 1950s police box has beamed to successive Time Lords through time and space. If some of the early producers of Doctor Who had had their way, however, the Tardis would have looked woke like a plastic bubble.

The BBC has released documents that show the arguments and agonising that took place in the 18 months preceding the first series of Doctor Who, broadcast in 1963. In addition to debates over the appearance of the Tardis, the Doctor's time machine, there was strong resistance to the creation of the Daleks, robotic monsters resolved to conquer the universe and exterminate human life.

The documents, newly deposited with the BBC Archive online project, show that the producers' original idea for the

Tardis was that viewers should not see a machine — only "a shape of 'nothingness". The Doctor would have achieved invisibility for his device with a coat of "light-resistant paint". The concept was overruled by Sydney Newman, then head of drama, as "not visual".

In a background note with pencilled annotations by Newman, Cecil Webber, a senior BBC children's writer, argues that if it were to be "a transparent plastic bubble", it would be associated with "all the low-grade spacefiction of cartoon strip and soap-opera". Instead, lye suggested the Doctor be shown "passing through some common object in the street such as a nightwatchman's shelter". This, he argued, would be a version of "the dear old Magic Door", a reference to CS Lewis's Chronicles of Narnia.

Eventually, the police box was chosen before the first episode was transmitted 45 years ago today.

Documents from summer 1962, when the BBC was researching ideas for a children's science-fiction series, show executives did not want anything That included "Bug-Eyed Monsters (BEMs)" or had "Tin Robots" as protagonists.

Newman may not have wanted BEMs but Verity Lambert, producer of Doctor Who, defied him and introduced them in the second storyline. The Daleks made their debut in late December 1963. She commissioned the designer Terry Nation to create them like "gliding Russian dancers". New-man's annoyance turned to delight when the Daleks added millions of viewers.

The 1963 background note also explains how Webber envisaged the main characters. This is his original description of Doctor Who, played first by William Hartnell. "A frail old man lost in space and time. He seems not to remember where he comes from; he is suspicious and capable of sudderlmalignance; he seems to have some undefined enemy; he is searching for something as well as fleeing from something."

The series is still running after 45 years, although with a 16-year break between 1989 and 2005. The Doctor is now played by David Tennant, although-11e has said he will step down before the 2010 series. Sebastian Brook, editor of Doctor Who Online, said: "It is amazing how this description of Doctor Who is like the one created when the series returned in 2005, except of course him not being a frail old man."

The 1963 memo also outlines what Webber thought would be the other main characters. One was to be called Bridget. She is described as "a with-it girl of 15, reaching the end of her secondary school career, eager for life; lower-than middle class. Avoid dialect; use neutral accent laced with the latest teenage slang". The other two central characters were' teachers at her school.

Bridget, or Biddy, finally emerged as Susan Foreman, Doctor Who's granddaughter and assistant.

The germinal story ideas in the notes did not go down well. One suggested plot, planned for Christmas 1963, reveals that Jacob Marley in Charles Dickens's A Christmas Carol was in fact Doctor Who. In another idea, Cinderella's fairy godmother was the Doctor's wife. Newman wrote underneath: "I don't like this much — it all reads silly and condescending."

Read the memos at timesonline.co.uk/tvandradio

Caption: The files show that Doctor Who, now played by David Tennant, above with Billie Piper, has changed little in 45 years

The first programme, The Unearthly Child, was broadcast on November 23, 1963, 45 years ago today

The Doctor travels in the Tardis, a 1950s police . phone box which conceals a vast interior. Its name is an acronym for Time and Relative Dimension in Space

The Daleks, robot mutants programmed to take over the universe, were created by Terry Nation and first appeared a month after the launch of Doctor Who. The tinny-voiced exterminators are commanded by Davros, a horribly scarred master scientist. Other enemies include the Cybermen, monsters from the planet Mondas and The Master, a renegade time lord who is the Doctor's nemesis

Doctor Who usually finds himself with young female assistants. Those who have played them include Katy Manning, Louise Jameson and Lalla Ward, left, wife of Richard Dawkins, the scientist and outspoken atheist