Doctor Who pays visit to Portland 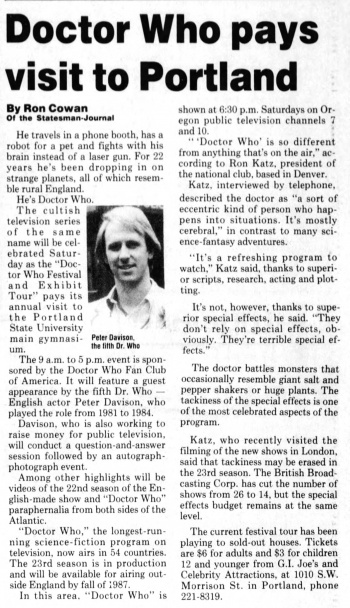 He travels in a phone booth, has a robot for a pet and fights with his brain instead of a laser gun. For 22 years he's been dropping in on strange planets, all of which resemble rural England.

The cultish television series of the same name will be celebrated Saturday as the "Doctor Who Festival and Exhibit Tour" pays its annual visit to the Portland State University main gymnasium.

The 9 a.m. to 5 p.m. event is sponsored by the Doctor Who Fan Club of America. It will feature a guest appearance by the fifth Dr. Who — English actor Peter Davison, who played the role from 1981 to 1984.

Davison, who is also working to raise money for public television, will conduct a question-and-answer session followed by an autograph-photograph event.

Among other highlights will be videos of the 22nd season of the English-made show and "Doctor Who" paraphernalia from both sides of the Atlantic.

"Doctor Who," the longest-running science-fiction program on television, now airs in 54 countries. The 23rd season is in production and will be available for airing outside England by fall of 1987.

In this area, "Doctor Who" is shown at 6:30 p.m. Saturdays on Oregon public television channels 7 and 10.

"'Doctor Who' is so different from anything that's on the air," according to Ron Katz, president of the national club, based in Denver.

Katz, interviewed by telephone, described the doctor as "a sort of eccentric kind of person who happens into situations. It's mostly cerebral," in contrast to many science-fantasy adventures.

"It's a refreshing program to watch," Katz said, thanks to superior scripts, research, acting and plotting.

The doctor battles monsters that occasionally resemble giant salt and pepper shakers or huge plants. The tackiness of the special effects is one of the most celebrated aspects of the program.

Katz, who recently visited the filming of the new shows in London, said that tackiness may be erased in the 23rd season. The British Broadcasting Corp. has cut the number of shows from 26 to 14, but the special effects budget remains at the same level.

The current festival tour has been playing to sold-out houses. Tickets are $6 for adults and $3 for children 12 and younger from G.I. Joe's and Celebrity Attractions, at 1010 S.W. Morrison St. in Portland, phone 221-8319.