Doctor Who plays it straight 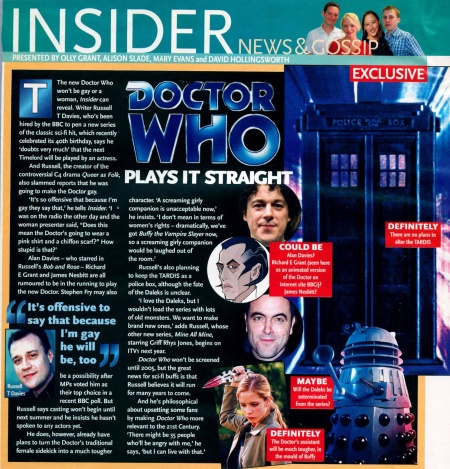 The new Doctor Who won't be gay or a woman, Insider can reveal. Writer Russell T Davies, who's been hired by the BBC to pen a new series of the classic sci-fi hit, which recently celebrated its 4oth birthday, says he 'doubts very much' that the next Timelord will be played by an actress.

And Russell, the creator of the controversial C4 drama Queer as Folk, also slammed reports that he was going to make the Doctor gay.

'It's so offensive that because I'm gay they say that,' he tells Insider. 'I was on the radio the other day and the woman presenter said, "Does this mean the Doctor's going to wear a pink shirt and a chiffon scarf?" How stupid is that?'

Alan Davies — who starred in Russell's Bob and Rose— Richard E Grant and James Nesbitt are all rumoured to be in the running to play the new Doctor. Stephen Fry may also be a possibility after MPs voted him as their top choice in a recent BBC poll. But Russell says casting won't begin until next summer and he insists he hasn't spoken to any actors yet.

Russell's also planning to keep the TARDIS as a police box, although the fate of the Daleks is unclear.

'I love the Daleks, but I wouldn't load the series with lots of old monsters. We want to make brand new ones,' adds Russell, whose other new series, Mine All Mine, starring Griff Rhys Jones, begins on ITV1 next year.

Doctor Who won't be screened until 2005, but the great news for sci-fi buffs is that Russell believes it will run for many years to come.

And he's philosophical about upsetting some fans by making Doctor Who more relevant to the 21st Century. 'There might be 35 people who'll be angry with me,' he says, 'but I can live with that.'

There are no plans to alter the TARDIS

Will the Daleks be exterminated from the series?

The Doctor's assistant will be much tougher, in the mould of Buffy