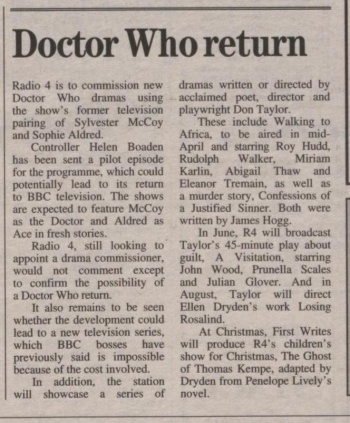 Radio 4 is to commission new Doctor Who dramas using the show's former television pairing of Sylvester McCoy and Sophie Aldred.

Controller Helen Boaden has been sent a pilot episode for the programme, which could potentially lead to its return to BBC television. The shows are expected to feature McCoy as the Doctor and Aldred as Ace in fresh stories.

Radio 4, still looking to appoint a drama commissioner, would not comment except to confirm the possibility of a Doctor Who return.

It also remains to be seen whether the development could lead to a new television series, which BBC bosses have previously said is impossible because of the cost involved.

In addition, the station will showcase a series of dramas written or directed by acclaimed poet, director and playwright Don Taylor.

These include Walking to Africa, to be aired in mid-April and starring Roy Hudd, Rudolph Walker, Miriam Karlin, Abigail Thaw and Eleanor Tremain, as well as a murder story, Confessions of a Justified Sinner. Both were written by James Hogg.

At Christmas, First Writes will produce R4's children's show for Christmas, The Ghost of Thomas Kempe, adapted by Dryden from Penelope Lively's novel.