Doctor Who seems poised for a breakthrough 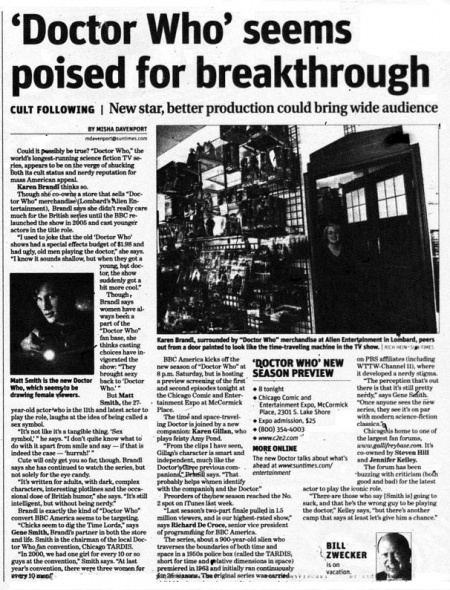 Could it possibly be true? "Doctor Who," the world's longest-running science fiction TV series, appears to be on the verge of shuckin bot its cult status and nerdy reputation for mass American appeal

Though she co-owns a store that sells "Doctor Who" merchandise (Lombard's Alien Entertainment), Brandl says she didn't really care much for the British series until the BBC relaunched the show in 2005 and cast younger actors in the title role.

"I used to joke that the old ' Doctor Who ' shows had a special effects budget of $1.98 and had ugly, old men playing the doctor," she says. "I know it sounds shallow, but when they got a young, hot doctor, the show suddenly got a bit more cool."

Though Brandl says women have always been a part of the "Doctor Who" fan base, she thinks casting choices have invigorated the show: "They brought sexy back to 'Doctor Who'."

But Matt Smith, the 27-year-old actor who is the 11th and latest actor to play the role, laughs at the idea of being called a sex symbol.

Cute will only get you so far, though. Brandl says she has continued to watch the series, but not solely for the eye candy.

"It's written for adults, with dark, complex characters, interesting plotlines and the occasional dose of British humor," she says. "It's still intelligent, but without being nerdy."

Brandl is exactly the kind of "Doctor Who" convert BBC America seems to be targeting.

"Chicks seem to dig the Time Lords," says Gene Smith, Brandl's partner in both the store and life. Smith is the chairman of the local Doctor Who fan convention, Chicago TARDIS.

BBC America kicks off the new season of "Doctor Who" at 8 p.m. Saturday, but is hosting a preview screening of the first and second episodes tonight at the Chicago Comic and Entertainment Expo at McCormick Place.

The time and space-traveling Doctor is joined by a new companion: Karen Gillan, who plays feisty Amy Pond.

"From the clips I have seen, Gillan's character is smart and independent, much like the Doctor 's three previous companions," Brandl says. "That probably helps women identify with the companion and the Doctor."

Preorders of the new season reached the No. 2 spot on iTunes last week.

The series, about a 900-year-old alien who traverses the boundaries of both time and space in a 1950s police box (called the TARDIS, short for time and relative dimensions in space) premiered in 1963 and initially ran continuously for 26 seasons. The original series was carried on PBS affiliates (including WTTW-Channel 11), where it developed a nerdy stigma.

"The perception that's out there is that it's still pretty nerdy," says Gene Smith. "Once anyone sees the new series, they see it's on par with modern science-fiction classics."

Chicago is home to one of the largest fan forums, www.gallifreybase.com. It's co-owned by Steven Hill and Jennifer Kelley.

The forum has been buzzing with criticism (both good and bad) for the latest actor to play the iconic role.

"There are those who say [Smith is] going to suck, and that he's the wrong guy to be playing the doctor," Kelley says, "but there's another camp that says at least let's give him a chance."

Caption: Color Photo: Rich Hein, Sun-Times / Karen Brandl, surrounded by "Doctor Who" merchandise at Alien Entertainment in Lombard, peers out from a door painted to look like the time-traveling machine in the TV show. Color Photo: Matt Smith is the new Doctor Who, which seems to be drawing female viewers.