Doctor Who series shelved by BBC 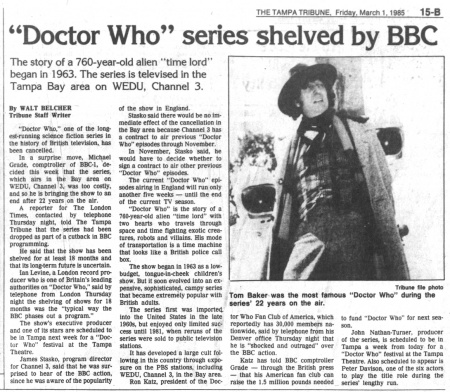 "Doctor Who," one of the longest-running science fiction series in the history of British television, has been cancelled.

In a surprise move, Michael Grade, comptroller of BBC-1, decided this week that the series, which airs in the Bay area on WEDU, Channel 3, was too costly, and so he is bringing the show to an end after 22 years on the air.

A reporter for The London Times, contacted by telephone Thursday night, told The Tampa Tribune that the series had been dropped as part of a cutback in BBC programming.

He said that the show has been shelved for at least 18 months and that its long-term future is uncertain.

Ian Levine, a London record producer who is one of Britain's leading authorities on "Doctor Who," said by telephone from London Thursday night the shelving of shows for 18 months was the "typical way the BBC phases out a program."

The show's executive producer and one of its stars are scheduled to be in Tampa next week for a "Doctor Who" festival at the Tampa Theatre.

James Stasko, program director for Channel 3, said that he was surprised to hear of the BBC action, since he was aware of the popularity of the show in England.

Stasko said there would be no immediate effect of the cancellation in the Bay area because Channel 3 has a contract to air previous "Doctor Who" episodes through November.

In November, Stasko said, he would have to decide whether to sign a contract to air other previous "Doctor Who" episodes.

The current "Doctor Who" episodes airing in England will run only another five weeks — until the end of the current TV season.

"Doctor Who" is the story of a 760-year-old alien "time lord" with two hearts who travels through space and time fighting exotic creatures, robots and villains. His mode of transportation is a time machine that looks like a British police call box.

The show began in 1963 as a low-budget, tongue-in-cheek children's show. But it soon evolved into an ex pensive, sophisticated, campy series that became extremely popular with British adults.

The series first was imported. into the United States in the late 1960s, but enjoyed only limited success until 1981, when reruns of the series were sold to public television stations.

It has developed a large cult following in this country through exposure on the PBS stations, including WEDU, Channel 3, in the Bay area.

Ron Katz, president of the Doctor Who Fan Club of America, which reportedly has 30,000 members nationwide, said by telephone from his Denver office Thursday night that he is "shocked and outraged" over the BBC action.

Katz has told BBC comptroller Grade — through the British press — that his American fan club can raise the 1.5 million pounds needed to fund "Doctor Who" for next season.

John Nathan-Turner, producer of the series, is scheduled to be in Tampa a week from today for a "Doctor Who" festival at the Tampa Theatre. Also scheduled to appear is Peter Davison, one of the six actors to play the title role during the series' lengthy run.

Caption: Tom Baker was the most famous "Doctor Who" during the series' 22 years on the air.