Doctor Who set to regenerate 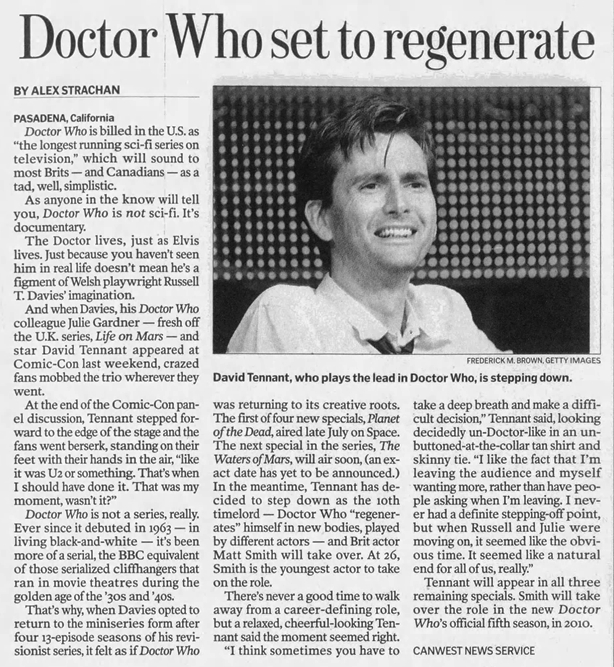 Doctor Who is billed in the U.S. as "the longest running sci-fi series on television," which will sound to most Brits — and Canadians — as a tad, well, simplistic.

And when Davies, his Doctor Who colleague Julie Gardner — fresh off the U.K. series, Life on Mars — and star David Tennant appeared at Comic-Con last weekend, crazed fans mobbed the trio wherever they went.

At the end of the Comic-Con panel discussion, Tennant stepped forward to the edge of the stage and the fans went berserk, standing on their feet with their hands in the air, "like it was Uz or something. That's when I should have done it. That was my moment, wasn't it?"

Doctor Who is not a series, really. Ever since it debuted in 1963 — in living black-and-white — it's been more of a serial, the BBC equivalent of those serialized cliffhangers that ran in movie theatres during the golden age of the '3os and '4os.

That's why, when Davies opted to return to the miniseries form after four 13-episode seasons of his revisionist series, it felt as if Doctor Who was returning to its creative roots. The first of four new specials, Planet of the Dead, aired late July on Space. The next special in the series, The Waters of Mars, will air soon, (an exact date has yet to be announced.) In the meantime, Tennant has decided to step down as the loth timelord — Doctor Who "regenerates" himself in new bodies, played by different actors — and Brit actor Matt Smith will take over. At 26, Smith is the youngest actor to take on the role.

Tennant will appear in all three remaining specials. Smith will take over the role in the new Doctor Who's official fifth season, in 2010.

Caption: David Tennant, who plays the lead in Doctor Who, is stepping down.