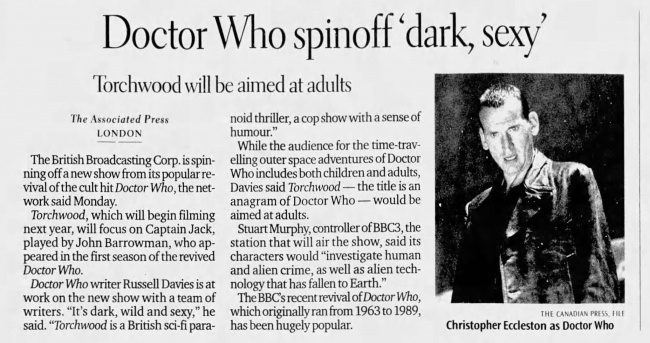 Torchwood will be aimed at adults

The British Broadcasting Corp. is spinning off a new show from its popular revival of the cult hit Doctor Who, the network said Monday.

Torchwood, which will begin filming next year, will focus on Captain Jack, played by John Barrowman, who appeared in the first season of the revived Doctor Who.

Doctor Who writer Russell Davies is at work on the new show with a team of writers. "It's dark, wild and sexy," he said. "Torchwood is a British sci-fi paranoid thriller, a cop show with a sense of humour."

While the audience for the time-travelling outer space adventures of Doctor Who includes both children and adults, Davies said Torchwood — the title is an anagram of Doctor Who — would be aimed at adults.

Stuart Murphy, controller of BBC3, the station that will air the show, said its characters would "investigate human and alien crime, as well as alien technology that has fallen to Earth."

The BBCs recent revival of Doctor Who, which originally ran from 1963 to 1989, has been hugely popular.

Caption: Christopher Eccleston as Doctor Who