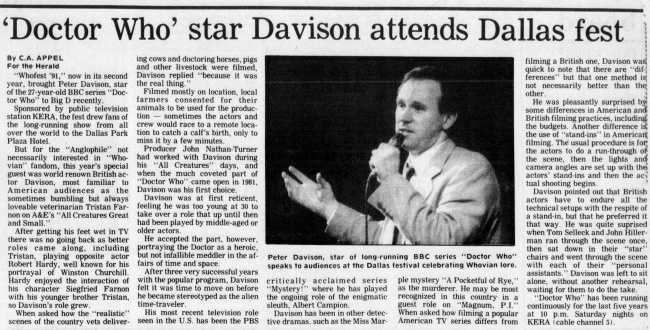 Sponsored by public television station KERA, the fest drew fans of the long-running show from all over the world to the Dallas Park Plaza Hotel.

But for the "Anglophile" not necessarily interested in "Whovian" fandom, this year's special guest was world renown British actor Davison, most familiar to American audiences as the sometimes bumbling but always loveable veterinarian Tristan Farnon on A&E's "All Creatures Great and Small."

After getting his feet wet in TV there was no going back as better roles came along, including Tristan, playing opposite actor Robert Hardy, well known for his portrayal of Winston Churchill. Hardy enjoyed the interaction of his character Siegfried Farnon with his younger brother Tristan, so Davison's role grew.

When asked how the "realistic" scenes of the country vets delivering cows and doctoring horses, pigs and other livestock were filmed, Davison replied "because it was the real thing."

Filmed mostly on location, local farmers consented for their animals to be used for the production — sometimes the actors and crew would race to a remote location to catch a calf's birth, only to miss it by a few minutes.

Producer John Nathan-Turner had worked with Davison during his "All Creatures" days, and when the much coveted part of "Doctor Who" came open in. 1981, Davison was his first choice.

Davison was at first reticent, feeling he was too young at 30 to take over a role that up until then had been played by middle-aged or older actors.

He accepted the part, however, portraying the Doctor as a heroic, but not infallible meddler in the affairs of time and space.

After three very successful years with the popular program, Davison felt it was time to move on before he became stereotyped as the alien time-traveler.

His most recent television role seen in the U.S. has been the PBS critically acclaimed series "Mystery!" where he has played the ongoing role of the enigmatic sleuth, Albert Campion.

Davison has been in other detective dramas. such as the Miss Marple mystery "A Pocketful of Rye," as the murderer. He may be most recognized in this country in a guest role on "Magnum, P.I." When asked how filming a popular American TV series differs from filming a British one, Davison was; quick to note that there are "differences" but that one method is not necessarily better than the; other.

He was pleasantly surprised by some differences in American and British filming practices, including the budgets. Another difference is the use of "stand-ins" in American filming. The usual procedure is for: the actors to do a run-through of the scene, then the lights and camera angles are set up with the actors' stand-ins and then the actual shooting begins.

Davison pointed out that British actors have to endure all the technical setups with the respite of a stand-in, but that he preferred it that way. He was quite suprised when Tom Selleck and John Hillerman ran through the scene once, then sat down in their "star" chairs and went through the scene with each of their "personal assistants." Davison was left to sit alone, without another rehearsal, waiting for them to do the take.

"Doctor Who" has been running continuously for the last five years at 10 p.m. Saturday nights on KERA (cable channel 5).