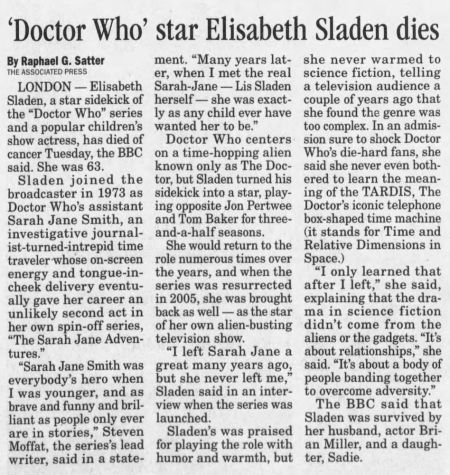 LONDON — Elisabeth Sladen, a star sidekick of the "Doctor Who" series and a popular children's show actress, has died of cancer Tuesday, the BBC said. She was 63.

Sladen joined the broadcaster in 1973 as Doctor Who's assistant Sarah Jane Smith, an investigative journalist-turned-intrepid time traveler whose on-screen energy and tongue-in-cheek delivery eventually gave her career an unlikely second act in her own spin-off series, "The Sarah Jane Adventures."

"Sarah Jane Smith was everybody's hero when I was younger, and as brave and funny and brilliant as people only ever are in stories," Steven Moffat, the series's lead writer, said in a statement. "Many years later, when I met the real Sarah-Jane — Lis Sladen herself — she was exactly as any child ever have wanted her to be."

Doctor Who centers on a time-hopping alien known only as The Doctor, but Sladen turned his sidekick into a star, playing opposite Jon Pertwee and Tom Baker for three-and-a-half seasons.

She would return to the role numerous times over the years, and when the series was resurrected in 2005, she was brought back as well — as the star of her own alien-busting television show.

"I left Sarah Jane a great many years ago, but she never left me," Sladen said in an interview when the series was launched.

Sladen's was praised for playing the role with humor and warmth, but she never warmed to science fiction, telling a television audience a couple of years ago that she found the genre was too complex. In an admission sure to shock Doctor Who's die-hard fans, she said she never even bothered to learn the meaning of the TARDIS, The Doctor's iconic telephone box-shaped time machine (it stands for Time and Relative Dimensions in Space.)

"I only learned that after I left," she said, explaining that the drama in science fiction didn't come from the aliens or the gadgets. "It's about relationships," she said. "It's about a body of people banding together to overcome adversity."

The BBC said that Sladen was survived by her husband, actor Brian Miller, and a daughter, Sadie.