Doctor Who to Run In Russian Cinemas 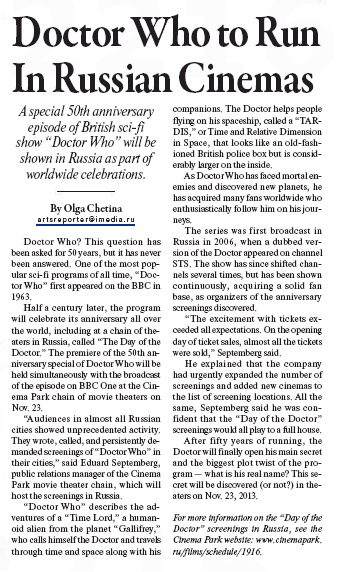 Doctor Who? This question has been asked for 50 years, but it has never been answered. One of the most popular sci-fi programs of all time, "Doctor Who" first appeared on the BBC in 1963.

Half a century later, the program will celebrate its anniversary all over the world, including at a chain of theaters in Russia, called "The Day of the Doctor." The premiere of the 50th anniversary special of Doctor Who will be held simultaneously with the broadcast of the episode on BBC One at the Cinema Park chain of movie theaters on Nov. 23.

"Audiences in almost all Russian cities showed unprecedented activity. They wrote, called, and persistently demanded screenings of "Doctor Who" in their cities," said Eduard Septemberg, public relations manager of the Cinema Park movie theater chain, which will host the screenings in Russia.

"Doctor Who" describes the adventures of a "Time Lord," a humanoid alien from the planet "Gallifrey," who calls himself the Doctor and travels through time and space along with his companions. The Doctor helps people flying on his spaceship, called a "TARDIS," or Time and Relative Dimension in Space, that looks like an old-fashioned British police box but is considerably larger on the inside.

As Doctor Who has faced mortal enemies and discovered new planets, he has acquired many fans worldwide who enthusiastically follow him on his journeys.

The series was first broadcast in Russia in 2006, when a dubbed version of the Doctor appeared on channel STS. The show has since shifted channels several times, but has been shown continuously, acquiring a solid fan base, as organizers of the anniversary screenings discovered.

"The excitement with tickets exceeded all expectations. On the opening day of ticket sales, almost all the tickets were sold," Septemberg said.

He explained that the company had urgently expanded the number of screenings and added new cinemas to the list of screening locations. All the same, Septemberg said he was confident that the "Day of the Doctor" screenings would all play to a full house.

After fifty years of running, the Doctor will finally open his main secret and the biggest plot twist of the program — what is his real name? This secret will be discovered (or not?) in theaters on Nov. 23, 2013. For more information on the "Day of the Doctor" screenings in Russia, see the Cinema Park website: www.cinemapark. ru/films/schedule/1916.