Doctor Who to go global in fall 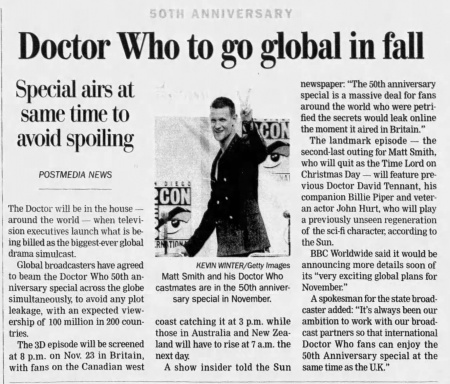 The Doctor will be in the house — around the world — when television executives launch what is being billed as the biggest-ever global drama simulcast.

Global broadcasters have agreed to beam the Doctor Who 50th anniversary special across the globe simultaneously, to avoid any plot leakage, with an expected viewership of 100 million in 200 countries.

The 3D episode will be screened at 8 p.m. on Nov. 23 in Britain, with fans on the Canadian west coast catching it at 3 p.m. while those in Australia and New Zealand will have to rise at 7 a.m. the next day.

A show insider told the Sun newspaper: "The 50th anniversary special is a massive deal for fans around the world who were petrified the secrets would leak online the moment it aired in Britain."

The landmark episode — the second-last outing for Matt Smith, who will quit as the Time Lord on Christmas Day — will feature previous Doctor David Tennant, his companion Billie Piper and veteran actor John Hurt, who will play a previously unseen regeneration of the sci-fi character, according to the Sun.

A spokesman for the state broadcaster added: "It's always been our ambition to work with our broadcast partners so that international Doctor Who fans can enjoy the 50th Anniversary special at the same time as the U.K."

Caption: Matt Smith and his Doctor Who castmates are in the 50th anniversary special in November.