Doctor Who took over my whole life 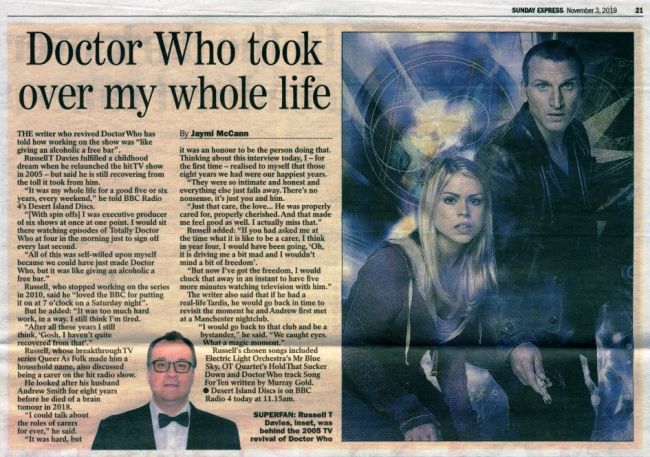 Doctor Who took over my whole life

THE writer who revived Doctor Who has told how working on the show was "like giving an alcoholic a free bar".

Russell T Davies fulfilled a childhood dream when he relaunched the hit TV show in 2005 — but said he is still recovering from the toll it took from him.

"It was my whole life for a good five or six years, every weekend," he told BBC Radio 4's Desert Island Discs.

"[With spin offs] I was executive producer of six shows at once at one point. I would sit there watching episodes of Totally Doctor Who at four in the morning just to sign off every last second.

"All of this was self-willed upon myself because we could have just made Doctor Who, but it was like giving an alcoholic a free bar."

Russell, who stopped working on the series in 2010, said he "loved the BBC for putting it on at 7 o'clock on a Saturday night".

But he added: "It was too much hard work, in a way. I still think I'm tired.

"After all these years I still think, 'Gosh, I haven't quite recovered from that'."

Russell, whose breakthrough TV series Queer As Folk made him a household name, also discussed being a carer on the hit radio show.

He looked after his husband Andrew Smith for eight years before he died of a brain tumour in 2018.

"I could talk about the roles of carers for ever," he said.

"It was hard, but it was an honour to be the person doing that. Thinking about this interview today, I — for the first time — realised to myself that those eight years we had were our happiest years.

"They were so intimate and honest and everything else just falls away. There's no nonsense, it's just you and him.

"Just that care, the love... He was properly cared for, properly cherished. And that made me feel good as well. I actually miss that."

Russell added: "If you had asked me at the time what it is like to be a carer, I think in year four, I would have been going, 'Oh, it is driving me a bit mad and I wouldn't mind a bit of freedom'.

"But now I've got the freedom, I would chuck that away in an instant to have five more minutes watching television with him."

The writer also said that if he had a real-life Tardis, he would go back in time to revisit the moment he and Andrew first met at a Manchester nightclub.

"I would go back to that club and be a bystander," he said. "We caught eyes. What a magic moment."

Caption: SUPERFAN: Russell T Davies, inset, was behind the 2005 TV revival of Doctor Who