Doctor Who trounces the wannabe singers 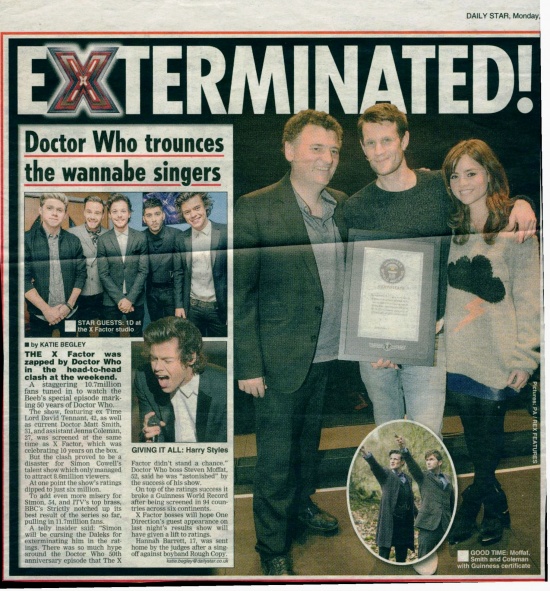 Doctor Who trounces the wannabe singers

THE X Factor was zapped by Doctor Who in the head-to-head clash at the weekend.

A staggering 10.7million fans tuned in to watch the Beeb's special episode marking 50 years of Doctor Who.. The show, featuring ex Time Lord David Tennant, 42, as well as current Doctor Matt Smith, 31, and assistant Jenna Coleman, 27, was screened at the same time as X Factor, which was celebrating 10 years on the box. But the clash proved to be a disaster for Simon Cowell's talent show which only managed to attract 8.6million viewers.

At one point the show's ratings dipped to just six million.

To add even more misery for Simon, 54, and ITV's top brass, BBC's Strictly notched up its best result of the series so far, pulling in 11.7million fans.

A telly insider said: "Simon will be cursing the Daleks for exterminating him in the ratings. There was so much hype around the Doctor Who 50th anniversary episode that The X Factor didn't stand a chance." Doctor Who boss Steven Moffat, 52, said he was "astonished" by the success of his show.

On top of the ratings success it broke a Guinness World Record after being screened in 94 countries across six continents.

X Factor bosses will hope One Direction's guest appearance on last night's results show will have given a lift to ratings. Hannah Barrett, 17, was sent home by the judges after a sing-off against boyband Rough Copy.

Caption: GIVING IT ALL: Harry Styles