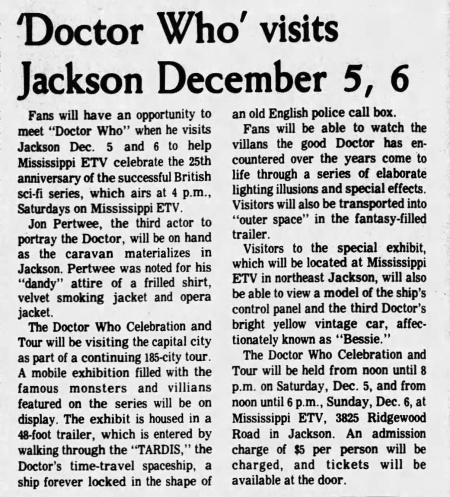 Fans will have an opportunity to meet "Doctor Who" when he visits Jackson Dec. 5 and 6 to help Mississippi ETV celebrate the 25th anniversary of the successful British sci-fi series, which airs at 4 p.m., Saturdays on Mississippi ETV.

Jon Pertwee, the third actor to portray the Doctor, will be on hand as the caravan materializes in Jackson. Pertwee was noted for his "dandy" attire of a frilled shirt. velvet smoking jacket and opera jacket.

The Doctor Who Celebration and Tour will be visiting the capital city as part of a continuing 185-city tour. A mobile exhibition filled with the famous monsters and villians featured on the series will be on display. The exhibit is housed in a 48-foot trailer, which is entered by walking through the "TARDIS," the Doctor's time-travel spaceship, a ship forever locked in the shape of an old English police call box.

Fans will be able to watch the villans the good Doctor has encountered over the years come to life through a series of elaborate lighting illusions and special effects. Visitors will also be transported into "outer space" in the fantasy-filled trailer.

Visitors to the special exhibit, which will be located at Mississippi ETV in northeast Jackson, will also be able to view a model of the ship's control panel and the third Doctor's bright yellow vintage car, affectionately known as "Bessie."

The Doctor Who Celebration and Tour will be held from noon until 8 p.m. on Saturday, Dec. 5, and from noon until 6 p.m., Sunday, Dec. 6, at Mississippi ETV, 3825 Ridgewood Road in Jackson. An admission charge of $5 per person will be charged, and tickets will be available at the door.