Doctor Who will be in Green Bay 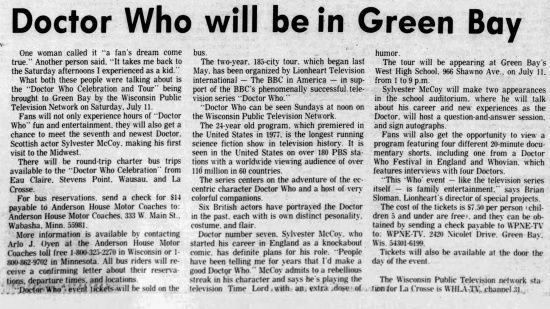 One woman called it "a fan's dream come true." Another person said, "It takes me back to the Saturday afternoons I experienced as a kid."

What both these people were talking about is the "Doctor Who Celebration and Tour" being brought to Green Bay by the Wisconsin Public Television Network on Saturday, July 11.

Fans will not only experience hours of "Doctor Who" fun and entertainment, they will also get a chance to meet the seventh and newest Doctor. Scottish actor Sylvester McCoy, making his first visit to the Midwest.

There will be round-trip charter bus trips available to the "Doctor Who Celebration" from Eau Claire, Stevens Point, Wausau, and La Crosse.

More information is available by contacting Arlo J. Oyen at the Anderson House Motor Coaches toll free in Wisconsin or in Minnesota. All bus riders will receive a confirming letter about their reservations, departure times, and locations.

"Doctor Who" event tickets will he sold on the bus.

The two-year, 185-city tour, which began last May, has been organized by Lionheart Television international — The BBC in America — in support of the BBC's phenomenally successful television series "Doctor Who."

"Doctor Who can be seen Sundays at noon on the Wisconsin Public Television Network.

The series centers on the adventure of the eccentric character Doctor Who and a host of very colorful companions.

Six British actors have portrayed the Doctor in the past. each with his own distinct pesonality, costume, and flair.

Doctor number seven, Sylvester McCoy, who started his career in England as a knockabout comic, has definite plans for his role. "People have been telling me for years that I'd make a good Doctor Who." McCoy admits to a rebellious streak in his character and says he's playing the television Time Lord with an extra dose of humor.

Sylvester McCoy will make two appearances in the school auditorium, where he will talk about his career and new experiences as the Doctor, will host a question-and-answer session, and sign autographs.

Fans will also get the opportunity to view a program featuring four different 20-minute documentary shorts. including one from a Doctor Who Festival in England and Whovian, which features interviews with four Doctors.

"This 'Who' event — like the television series itself — is family entertainment," says Brian Sloman. Lionheart's director of special projects.

Tickets will also be available at the door the day of the event.