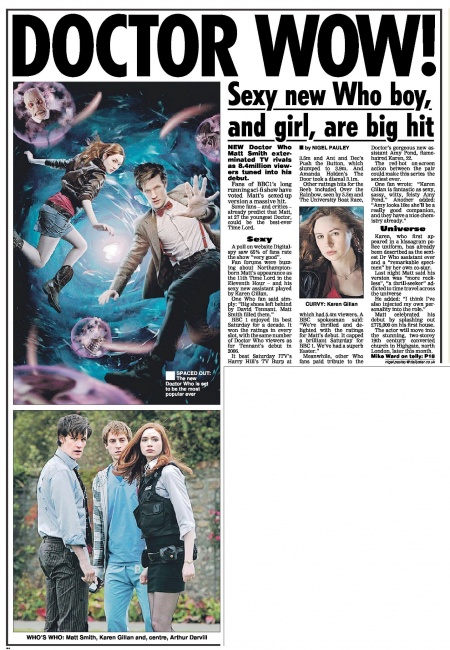 Sexy new Who boy, and girl, are big hit

Fans of BBC1's long running sci-fi show have voted Matt's sexed-up version a massive hit. Some fans — and critics —already predict that Matt, at 27 the youngest Doctor, could be the best-ever Time Lord.

A poll on website Digital-spy saw 65% of fans rate the show "very good".

Fan forums were buzzing about Northampton-born Matt's appearance as the 11th Time Lord in the Eleventh Hour — and his sexy new assistant played by Karen Gillan.

One Who fan said simply: "Big shoes left behind by David Tennant. Matt Smith filled them."

BBC 1 enjoyed its best Saturday for a decade. It won the ratings in every slot, with the same number of Doctor Who viewers as for Tennant's debut in 2006.

It beat Saturday ITV's Harry Hill's TV Burp at 3.5m and Ant and Dec's Push the Button, which slumped to 3.9m. And Amanda Holden's The Door took a dismal 3.1m.

Other ratings hits for the Beeb included Over the Rainbow, seen by 5.5m and The University Boat Race,

which had 5.4m viewers. A BBC spokesman said: "We're thrilled and delighted with the ratings for Matt's debut. It capped a brilliant Saturday for BBC 1. We've had a superb Easter."

The red-hot on-screen action between the pair could make this series the sexiest ever.

One fan wrote: "Karen Gillan is fantastic as sexy, sassy, witty, feisty Amy Pond." Another added: "Amy looks like she'll be a really good companion, and they have a nice chemistry already."

Karen, who first appeared in a kissagram police uniform, has already been described as the sexiest Dr Who assistant ever and a "remarkable specimen" by her own co-star. Last night Matt said his version was "more reckless", "a thrill-seeker" addicted to time travel across the universe

He added: "I think I've also injected my own personality into the role." Matt celebrated his debut by splashing out £775,000 on his first house. The actor will move into the stunning, two-storey 19th century converted church in Highgate, north London, later this month. Mike Ward on telly: P18

Caption: SPACED OUT: The new Doctor Who is set to be the most popular ever