Doctor collectables up at auction 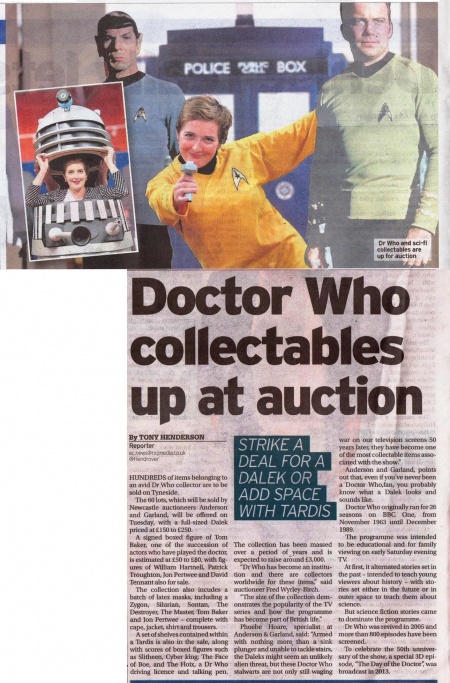 HUNDREDS of items belonging to an avid Dr Who collector are to be sold on Tyneside.

The 60 lots, which will be sold by Newcastle auctioneers Anderson and Garland, will be offered on Tuesday, with a full-sized Dalek priced at £150 to £250.

A signed boxed figure of Tom Baker, one of the succession of actors who have played the doctor, is estimated at £50 to £80, with figures of William Hartnell, Patrick Troughton, Jon Pertwee and David Tennant also for sale.

The collection also incudes a batch of latex masks, including a Zygon, Silurian, Sontan, The Destroyer, The Master, Tom Baker and Jon Pertwee - complete with cape, jacket, shirt and trousers.

A set of shelves contained within a Tardis is also in the sale, along with scores of boxed figures such as Slitheen, Cyber king, The Face of Boe, and The Hoix, a Dr Who driving licence and talking pen.

The collection has been massed over a period of years and is expected to raise around £3,000.

"Dr Who has become an institution and there are collectors worldwide for these items," said auctioneer Fred Wyrley-Birch.

Phoebe Hoare, specialist at Anderson & Garland, said: "Armed with nothing more than a sink plunger and unable to tackle stairs, the Daleks might seem an unlikely alien threat, but these Doctor Who stalwarts are not only still waging war on our television screens 50 years later, they have become one of the most collectable items associated with the show."

Anderson and Garland, points out that, even if you've never been a Doctor Who,fan, you probably know what a Dalek looks and sounds like.

Doctor Who originally ran for 26 seasons on BBC One, from November 1963 until December 1989.

The programme was intended to be educational and for family viewing on early Saturday evening TV.

At first, it alternated stories set in the past - intended to teach young viewers about history - with stories set either in the future or in outer space to teach them about science.

But science fiction stories came to dominate the programme.

Dr Who was revived in 2005 and more than 800 episodes have been screened.

To celebrate the 50th anniversary of the show, a special 3D episode, "The Day of the Doctor'; was broadcast in 2013.

STRIKE A DEAL FOR A DALEK OR ADD SPACE WITH TARDIS

Caption: Dr Who and sci-fi collectables are up for auction