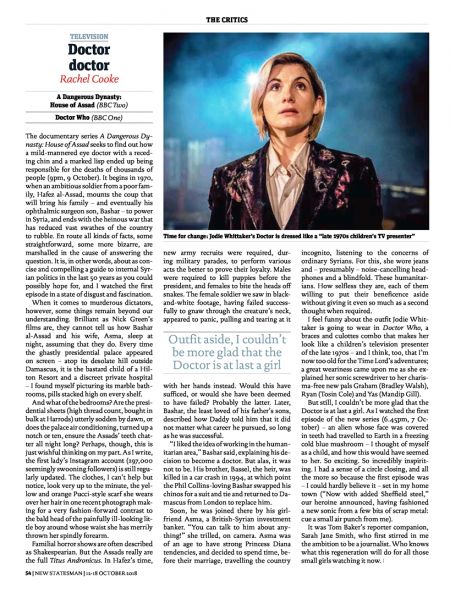 I feel funny about the outfit Jodie Whittaker is going to wear in Doctor Who, a braces and culottes combo that makes her look like a children's television presenter of the late 1970s — and I think, too, that I'm now too old for the Time Lord's adventures; a great weariness came upon me as she explained her sonic screwdriver to her charisma-free new pals Graham (Bradley Walsh), Ryan (Tosin Cole) and Yas (Mandip Gill).

But still, I couldn't be more glad that the Doctor is at last a girl. As I watched the first episode of the new series (6.45pm, 7 October) — an alien whose face was covered in teeth had travelled to Earth in a freezing cold blue mushroom — I thought of myself as a child, and how this would have seemed to her. So exciting. So incredibly inspiriting. I had a sense of a circle closing, and all the more so because the first episode was — I could hardly believe it — set in my home town ("Now with added Sheffield steel," our heroine announced, having fashioned a new sonic from a few bits of scrap metal: cue a small air punch from me).

It was Tom Baker's reporter companion, Sarah Jane Smith, who first stirred in me the ambition to be a journalist. Who knows what this regeneration will do for all those small girls watching it now.