Doctor in the house (Daily Star) 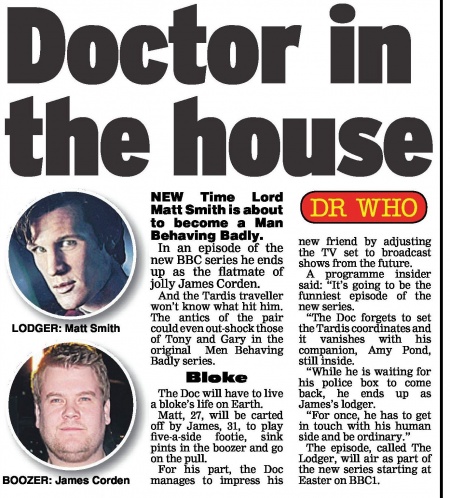 NEW Time Lord Matt Smith is about to become a Man Behaving Badly.

In an episode of the new BBC series he ends up as the flatmate of jolly James Corden. And the Tardis traveller won't know what hit him. The antics of the pair could even out-shock those of Tony and Gary in the original Men Behaving Badly series.

The Doc will have to live a bloke's life on Earth. Matt, 27, will be carted off by James, 31, to play five-a-side footie, sink pints in the boozer and go on the pull.

For his part, the Doc manages to impress his new friend by adjusting the TV set to broadcast shows from the future.

A programme insider said: "It's going to be the funniest episode of the new series.

"The Doc forgets to set the Tardis coordinates and it vanishes with his companion, Amy Pond, still inside.

"While he is waiting for his police box to come back, he ends up as James's lodger.

"For once, he has to get in touch with his human side and be ordinary."

The episode, called The Lodger, will air as part of the new series starting at Easter on BBC1.