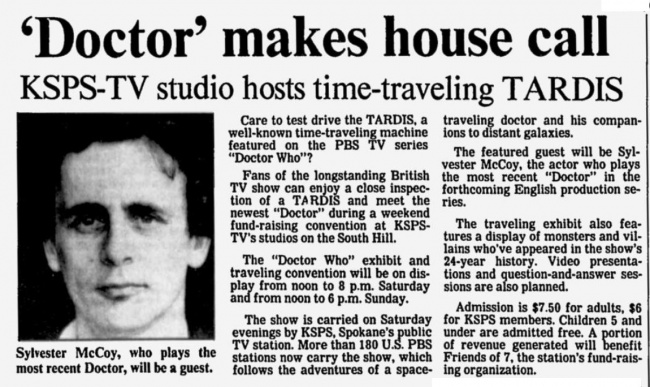 Care to test drive the TARDIS, a well-known time-traveling machine featured on the PBS TV series "Doctor Who"?

Fans of the longstanding British TV show can enjoy a close inspection of a TARDIS and meet the newest "Doctor" during a weekend fund-raising convention at KSPS-TV's studios on the South Hill.

The "Doctor Who" exhibit and traveling convention will be on display from noon to 8 p.m. Saturday and from noon to 6 p.m. Sunday.

The show is carried on Saturday evenings by KSPS, Spokane's public TV station. More than 180 U.S. PBS stations now carry the show, which follows the adventures of a space-traveling doctor and his companions to distant galaxies.

The featured guest will be Sylvester McCoy, the actor who plays the most recent "Doctor" in the forthcoming English production series.

The traveling exhibit also features a display of monsters and villains who've appeared in the show's 24-year history. Video presentations and question-and-answer sessions are also planned.

Admission is $7.50 for adults, $6 for KSPS members. Children 5 and under are admitted free. A portion of revenue generated will benefit Friends of 7, the station's fund-raising organization.

Caption: Sylvester McCoy, who plays the most recent Doctor, will be a guest.