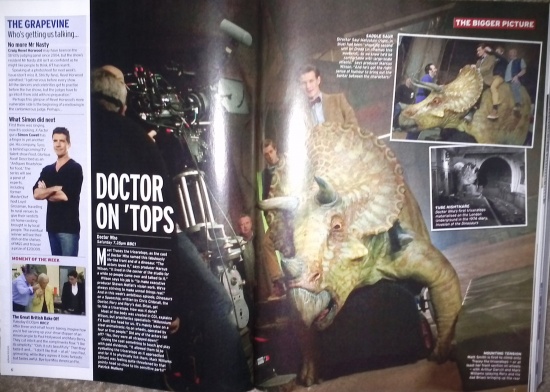 Meet Tracey the triceratops, as the cast of Doctor Who named this fabulously life-like front end of a dinosaur. "The actors loved it,' says producer Marcus Wilson. "It lived in the corner of the studio for a while so people came over and talked to it."

Wilson says his job is "to make executive producer Steven Moffat's vision work. We're always striving to make unreal things real." And in this week's ambitious episode, Dinosaurs on a Spaceship, written by Chris Chibnall, the Doctor, Rory and Rory's dad, Brian, get to ride a triceratops. How was it done?

Most of the body was created in CGI, explains Wilson, but prosthetics specialists "Millennium FX built the head for us. It's mainly latex on a steel animatronic rig on wheels, operated by four or five people." Did any of the actors fall off? "No, they were all strapped down!"

Giving the cast something to touch and play with paid dividends. "It allowed them to be eyeballing the triceratops as it approached and for it to physically lick them. Mark Williams [Brian] was feeling quite threatened by that pointy head so close to his sensitive parts!"

SADDLE SAUR Director Saul Metzstein (right, in blue) had been "shooting second unit on Dredd [in cinemas this weekend], so we knew he'd be comfortable with large-scale effects," says producer Marcus Wilson. "And he's got the right sense of humour to bring out the banter between the characters."

Doctor Who's first triceratops materialised on the London Underground in the 1974 story, Invasion of the Dinosaurs