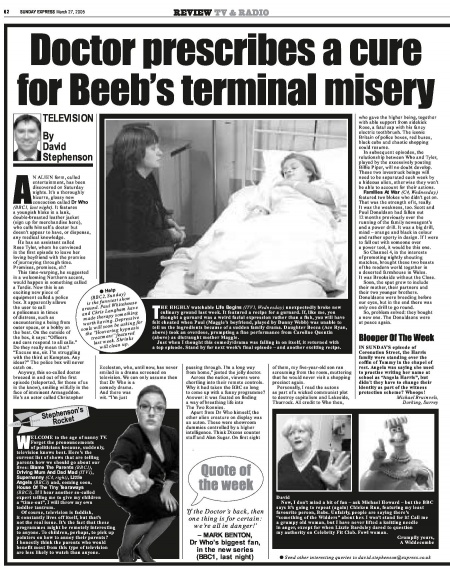 AN ALIEN form, called entertainment, has been discovered on Saturday nights. It's a thoroughly bizarre, glossy new concoction called Dr Who (BBC1, last night). It features a youngish bloke in a lank, double-breasted leather jacket (sign up for merchandise here), who calls himself a doctor but doesn't appear to have, or dispense, any medical knowledge.

He has an assistant called Rose Tyler, whom he convinced in the first episode to leave her boyfriend with the promise of journeying through time. Promises, promises, eh?

This time-warping, he suggested in a welcoming Northern accent, would happen in something called a Tardis. Now this is an exciting new piece of equipment called a police box. It apparently allows the user to call a policeman in times of distress, such as encountering a being from outer space, or a blobby on the beat. On the outside of the box, it says: "Officers and cars respond to all calls." Do they really mean that? "Excuse me, sir. I'm struggling with the third at Kempton. Any ideas?" The police box will never catch on.

Anyway, this so-called doctor breezed in and out of the first episode (teleported, for those in the know), smiling willfully in the face of imminent Armageddon. He's an actor called Christopher Eccleston, who, until now, has never smiled in a drama screened on television. We can only assume then that Dr Who is a comedy drama. And there was wit. "I'm just passing through. I'm a long way from home," jested the jolly doctor.

Across the nation, viewers were chortling into their remote controls. Why it had taken the BBC so long to come up with a funny programme? Answer: it was fixated on finding way of breathing life into The Two Ronnies.

Apart from Dr Who himself the other alien creature on display was an auton. These were showroom dummies controlled by a higher intelligence. Think Dixons counter staff and Alan Sugar. On first sight of them, my five-year-old son ran screaming from the room, muttering that he would never visit a shopping precinct again.

Personally, I read the autons as part of a wicked communist plot to destroy capitalism and Lakeside, Thurrock. All credit to Who then, who gave the higher being, together with the support from sidekick Rose, a fatal zap with his fancy electric toothbrush. The iconic Britain of police boxes, red buses, black cabs and chaotic shopping could resume.

In subsequent episodes, the relationship between Who and Tyler, played by the excessively pouting Billie Piper, will no doubt develop. These two lovestruck beings win need to be separated each week by hideous alien, otherwise they won't be able to account for their actions.