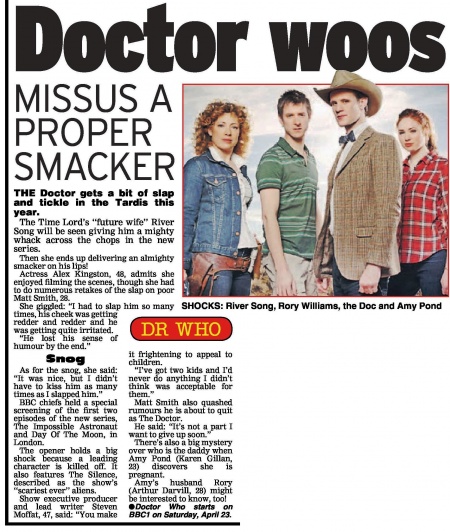 THE Doctor gets a bit of slap and tickle in the Tardis this year.

The Time Lord's "future wife" River Song will be seen giving him a mighty whack across the chops in the new series.

Then she ends up delivering an almighty smacker on his lips!

Actress Alex Kingston, 48, admits she enjoyed filming the scenes, though she had to do numerous retakes of the slap on poor Matt Smith, 28.

"He lost his sense of humour by the end."

As for the snog, she said: "It was nice, but I didn't have to kiss him as many times as I slapped him."

BBC chiefs held a special screening of the first two episodes of the new series, The Impossible Astronaut and Day Of The Moon, in London.

The opener holds a big shock because a leading character is killed off. It also features The Silence, described as the show's "scariest ever" aliens.

"I've got two kids and I'd never do anything I didn't think was acceptable for them."

Matt Smith also quashed rumours he is about to quit as The Doctor.

He said: "It's not a part I want to give up soon." There's also a big mystery over who is the daddy when Amy Pond (Karen Gillan, 23) discovers she is pregnant.

Doctor Who starts on BBC1 on Saturday, April 23.