Doctors Who reunite in Dead Zone to honor 20th year 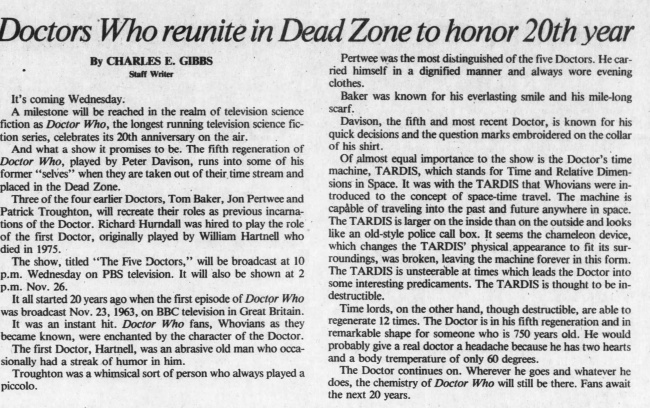 And what a show it promises to be. The fifth regeneration of Doctor Who, played by Peter Davison, runs into some of his former "selves" when they are taken out of their time stream and placed in the Dead Zone.

Three of the four earlier Doctors, Tom Baker, Jon Pertwee and Patrick Troughton, will recreate their roles as previous incarnations of the Doctor. Richard Hurndall was hired to play the role of the first Doctor, originally played by William Hartnell who died in 1975.

It all started 20 years ago when the first episode of Doctor Who was broadcast Nov. 23, 1963, on BBC television in Great Britain.

It was an instant hit. Doctor Who fans, Whovians as they became known, were enchanted by the character of the Doctor.

The first Doctor, Hartnell, was an abrasive old man who occasionally had a streak of humor in him.

Troughton was a whimsical sort of person who always played a piccolo.

Pertwee was the most distinguished of the five Doctors. He carried himself in a dignified manner and always wore evening clothes.

Baker was known for his everlasting smile and his mile-long scarf.

Davison, the fifth and most recent Doctor, is known for his quick decisions and the question marks embroidered on the collar of his shirt.

Of almost equal importance to the show is the Doctor's time machine, TARDIS, which stands for Time and Relative Dimensions in Space. It was with the TARDIS that Whovians were introduced to the concept of space-time travel. The machine is capable of traveling into the past and future anywhere in space. The TARDIS is larger on the inside than on the outside and looks like an old-style police call box. It seems the chameleon device, which changes the TARDIS' physical appearance to fit its surroundings, was broken, leaving the machine forever in this form. The TARDIS is unsteerable at times which leads the Doctor into some interesting predicaments. The TARDIS is thought to be indestructible.

Time lords, on the other hand, though destructible, are able to regenerate 12 times. The Doctor is in his fifth regeneration and in remarkable shape for someone who is 750 years old. He would probably give a real doctor a headache because he has two hearts and a body tremperature of only 60 degrees.

The Doctor continues on. Wherever he goes and whatever he does, the chemistry of Doctor Who will still be there. Fans await the next 20 years.