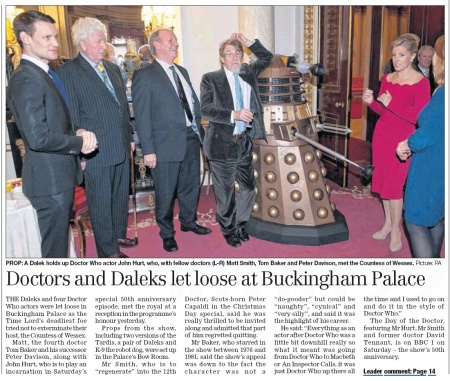 THE Daleks and four Doctor Who actors were let loose in Buckingham Palace as the Time Lord's deadliest foe tried not to exterminate their host, the Countess of Wessex.

Matt, the fourth doctor Tom Baker and his successor Peter Davison, along with John Hurt, who is to play an incarnation in Saturday's special 50th anniversary episode, met the royal at a reception in the programme's honour yesterday.

Props from the show, including two versions of the Tardis, a pair of Daleks and K-9 the robot dog, were set up in the Palace's Bow Room.

Mr Smith, who is to "regenerate" into the 12th Doctor, Scots-born Peter Capaldi in the Christmas Day special, said he was really thrilled to be invited along and admitted that part of him regretted quitting.

Mr Baker, who starred in the show between 1976 and 1981, said the show's appeal was down to the fact the character was not a "do-gooder" but could be "naughty", "cynical" and "very silly", and said it was the highlight of his career.

He said: "Everything as an actor after Doctor Who was a little bit downhill really so what it meant was going from Doctor Who to Macbeth or An Inspector Calls, it was just Doctor Who up there all the time and I used to go on and do it in the style of Doctor Who."

The Day of the Doctor, featuring Mr Hurt, Mr Smith and former doctor David Tennant, is on BBC 1 on Saturday – the show's 50th anniversary.