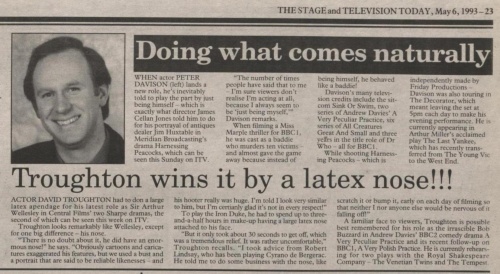 WHEN actor PETER DAVISON (left) lands a new role, he's inevitably told to play the part by just being himself - which is exactly what director James Cellar; Jones told him to do for his portrayal of antiques dealer Jim Huxtable in Meridian Broadcasting's drama Harnessing Peacocks, which can be seen this Sunday on ITV.

"The number of times people have said that to me -- I'm sure viewers don't realise I'm acting at all, because I always seem to be 'just being myself,"' Davison remarks.

When filming a Miss Marple thriller for BBC 1. he was cast as a baddie who murders ten victims and almost gave the game away because instead of being himself, he behaved like a baddie!

Davison's many television credits include the sitcom Sink Or Swim, two series of Andrew Davies' A Very Peculiar Practice, six series of All Creatures Great And Small and three series in the title role of Dr Who - all for BBC 1.

While shooting Harnessing Peacocks - which is independently made by Friday Productions Davison was also touring in The Decorator, which meant leaving the set at 5pm each day to make his evening performance. He is currently appearing in Arthur Miller's acclaimed play The Last Yankee, which has recently transferred from The Young Vic to the West End.

Troughton wins it by a latex nose!!!

ACTOR DAVID TROUGHTON had to don a large latex apendage for his latest role as Sir Arthur Wellesley in Central Films' two Sharpe dramas, the second of which can be seen this week on ITV.

Troughton looks remarkably like Wellesley, except for one big difference - his nose.

"There is no doubt about it, he did have an enormous nose!" he says. "Obviously cartoons and caricatures exaggerated his features, but we used a bust and a portrait that are said to be reliable likenesses - and his hooter really was huge. I'm told I look very similar to him, but I'm certianly glad it's not in every respect!"

To play the Iron Duke, he had to spend up to three-and-a-half hours in make-up having a large latex nose attached to his face.

"But it only took about 30 seconds to get off, which was a tremendous relief. It was rather uncomfortable," Troughton recalls. "I took advice from Robert Lindsay, who has been playing Cyrano de Bergerac. He told me to do some business with the nose, like scratch it or bump it, early on each day of filming so that neither I nor anyone else would be nervous of it falling of}?"

A familiar face to viewers, Troughton is possible best remembered for his role as the irrascible Bob Buzzard in Andrew Davies' BBC2 comedy drama A Very Peculiar Practice and its recent follow-up on BBC1, A Very Polish Practice. He is currently rehearsing for two plays with the Royal Shakespeare Company -- The Venetian Twins and The Tempest.