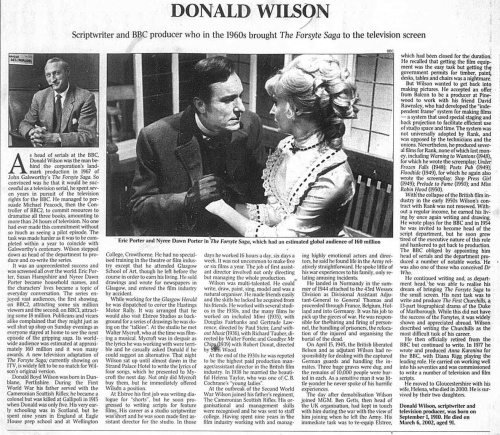 As head of serials at the BBC, Donald Wilson was the man behind the corporation's landmark production in 1967 of John Galsworthy's The Forsyte Saga. So convinced was he that it would be successful as a television serial, he spent seven years in pursuit of the television rights for the BBC. He managed to persuade Michael Peacock, then the Controller of BBC2, to commit resources to dramatise all three books, amounting to more than 24 hours of television. No one had ever made this commitment without so much as seeing a pilot episode. The task was made harder as it was to be completed within a year to coincide with Galsworthy's centenary. Wilson stepped down as head of the department to produce and co-write the series.

It was an unprecedented success and was screened all over the world. Eric Porter, Susan Hampshire and Nyree Dawn Porter became household names, and the characters' lives became a topic of everyday conversation. The series enjoyed vast audiences, the first showing, on BBC2, attracting some six million viewers and the second, on BBC1, attracting some 18 million. Publicans and vicars alike complained that they might just as well shut up shop on Sunday evenings as everyone stayed at home to see the next episode of the gripping saga. Its worldwide audience was estimated at approximately 160 million and it won many awards. A new television adaptation of The Forsyte Saga, currently showing on ITV, is widely felt to be no match for Wilson's original version.

Donald Boyd Wilson was born in Dunblane, Perthshire. During the First World War his father served with the Cameronian Scottish Rifles; he became a colonel but was killed at Gallipoli in 1915 when Donald was only five. His very early schooling was in Scotland, but he spent nine years in England at Eagle House prep school and at Wellington College, Crowthorne. He had no specialised training in the theatre or film industry except that he attended Glasgow School of Art, though he left before the course in order to earn his living. He sold drawings and wrote for newspapers in Glasgow, and entered the film industry by accident.

While working for the Glasgow Herald he was dispatched to cover the Hastings Motor Rally. It was arranged that he would also visit Elstree Studios as background for a series of drawings he was doing on the "talkies". At the studio he met Walter Mycroft, who at the time was filming a musical. Mycroft was in despair as the lyrics he was working with were terrible and he casually asked Donald if he could suggest an alternative. That night Wilson sat up until almost dawn in the Strand Palace Hotel to write the lyrics of four songs, which he presented to Mycroft the next day. Not only did Mycroft buy them, but he immediately offered Wilson a position.

At Elstree his first job was writing dialogue for "shorts", but he soon progressed to writing scripts for feature films. His career as a studio scriptwriter was short and he was soon made first assistant director for the studio. In those days he worked 16 hours a day, six days a week. It was not uncommon to make five or six films a year. The job of first assistant director involved not only directing but managing the whole production.

Wilson was multi-talented. He could write, draw, paint, sing, model and was a natural organiser. He made friends easily and the skills he lacked he acquired from his friends. He worked with several studios in the 1930s, and the many films he worked on included Mimi (1935), with Douglas Fairbanks and Gertrude Lawrence, directed by Paul Stein; Land without Music (1936), with Richard Tauber, directed by Walter Forde; and Goodbye Mr Chips (1939) with Robert Donat, directed by Sam Wood.

At the end of the 1930s he was reputed to be the highest paid production manager/assistant director in the British film industry. In 1938 he married the beautiful Helena Taylor, who was one of C. B. Cochrane's "young ladies".

At the outbreak of the Second World War Wilson joined his father's regiment, The Cameronian Scottish Rifles. His organisational and management skills were recognised and he was sent to staff college. Having spent nine years in the film industry working with and managing highly emotional actors and directors, he said he found life in the Army relatively straightforward. He spoke little of his war experiences to his family, only relating amusing incidents.

He landed in Normandy in the summer of 1944 attached to the 43rd Wessex Division as Divisional Assistant Adjutant-General to General Thomas and proceeded through France, Belgium, Holland and into Germany. It was his job to pick up the pieces of war. He was responsible for the hiring and firing of personnel, the handling of prisoners, the relocation of the injured and organising the burial of the dead.

On April 15, 1945, the British liberated Belsen and as adjutant Wilson had responsibility for dealing with the captured German guards and handling the inmates. Three huge graves were dug, and the remains of 10,000 people were buried in each. As a sensitive man it was little wonder he never spoke of his horrific experiences.

The day after demobilisation Wilson joined MGM. Ben Getts, then head of the UK organisation, had kept in touch with him during the war with the view of him joining when he left the Army. His immediate task was to re-equip Elstree, which had been closed for the duration. He recalled that getting the film equipment was the easy task but getting the government permits for timber, paint, desks, tables and chairs was a nightmare.

But Wilson wanted to get back into making pictures. He accepted an offer from Balcon to be a producer at Pinewood to work with his friend David Rawnsley, who had developed the "independent frame" system for making films -a sys-tem that used special staging and back projection to facilitate efficient use of studio space and time. The system was not universally adopted by Rank, and was opposed by the technicians and the unions. Nevertheless, he produced several films for Rank, none of which lost money, including Warning to Wantons (1948), for which he wrote the screen-play; Under Frozen Falls (1948); Poets Pub (1949); Floodtide (1949), for which he again also wrote the screenplay; Stop Press Girl (1949); Prelude to Fame (1950); and Miss Robin Hood (1950).

With the collapse of the British film industry in the early 1950s Wilson's contract with Rank was not renewed. Without a regular income, he earned his living by once again writing and drawing. He wrote plays for the BBC and in 1954 he was invited to become head of the script department, but he soon grew tired of the executive nature of this role and hankered to get back to production. The BBC obliged by appointing him head of serials and the department produced a number of notable works. He was also one of those who conceived Dr Who.

He continued writing and, as department head, he was able to realise his dream of bringing The Forsyte Saga to the small screen. His next task was to write and produce The First Churchills, a 13-part biographical drama of the Duke of Marlborough. While this did not have the success of the Forsytes, it was widely shown and appreciated abroad. Wilson described writing the Churchills as the most difficult task of his career.

He then officially retired from the BBC but continued to write. In 1977 he wrote and produced Anna Karenina for the BBC, with Diana Rigg playing the leading role. He carried on working well into his seventies and was commissioned to write a number of television and film scripts.

He moved to Gloucestershire with his wife, Helena, who died in 2000. He is survived by their two daughters.