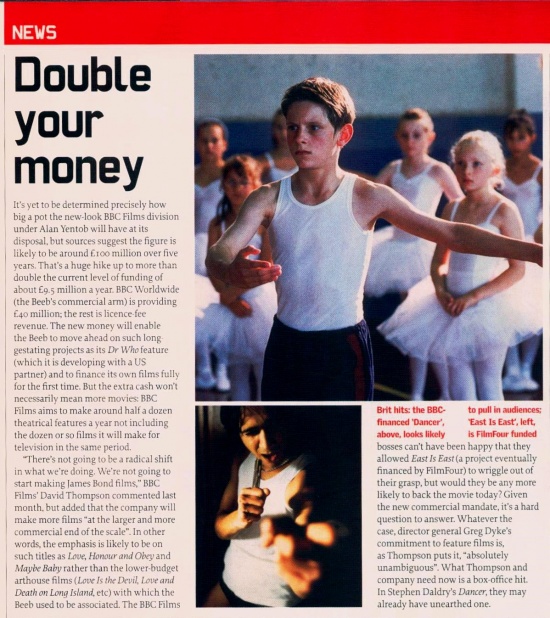 It's yet to be determined precisely how big a pot the new-look BBC Films division under Alan Yentob will have at its disposal, but sources suggest the figure is likely to be around £100 million over five years. That's a huge hike up to more than double the current level of funding of about £9.5 million a year. BBC Worldwide (the Beeb's commercial arm) is providing £4o million; the rest is licence-fee revenue. The new money will enable the Beeb to move ahead on such long-gestating projects as its Dr Who feature (which it is developing with a US partner) and to finance its own films fully for the first time. But the extra cash won't necessarily mean more movies: BBC Films aims to make around half a dozen theatrical features a year not including the dozen or so films it will make for television in the same period.

"There's not going to be a radical shift in what we're doing. We're not going to start making James Bond films," BBC Films' David Thompson commented last month, but added that the company will make more films "at the larger and more commercial end of the scale". In other words, the emphasis is likely to be on such titles as Love, Honour and Obey and Maybe Baby rather than the lower-budget arthouse films (Love Is the Devil, Love and Death on Long Island, etc) with which the Beeb used to be associated. The BBC Films bosses can't have been happy that they allowed East Is East (a project eventually financed by FilmFour) to wriggle out of their grasp, but would they be any more likely to back the movie today? Given the new commercial mandate, it's a hard question to answer. Whatever the case, director general Greg Dyke's commitment to feature films is, as Thompson puts it, "absolutely unambiguous". What Thompson and company need now is a box-office hit. In Stephen Daldry's Dancer, they may already have unearthed one.