Dr. What? The next Who's a lady 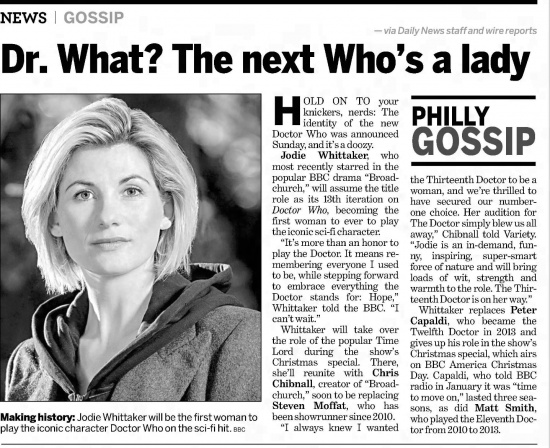 HOLD ON TO your knickers, nerds: The identity of the new Doctor Who was announced Sunday, and it's a doozy.

Jodie Whittaker, who most recently starred in the popular BBC drama "Broadchurch," will assume the title role as its 13th iteration on Doctor Who, becoming the first woman to ever to play the iconic sci-fi character.

"It's more than an honor to play the Doctor. It means remembering everyone I used to be, while stepping forward to embrace everything the Doctor stands for: Hope," Whittaker told the BBC. "I can't wait."

Whittaker will take over the role of the popular Time Lord during the show's Christmas special. There, she'll reunite with Chris Chibnall, creator of "Broadchurch," soon to be replacing Steven Moffat, who has been showrunner since 2010.

"I always knew I wanted the Thirteenth Doctor to be a woman, and we're thrilled to have secured our number-one choice. Her audition for The Doctor simply blew us all away," Chibnall told Variety. "Jodie is an in-demand, funny, inspiring, super-smart force of nature and will bring loads of wit, strength and warmth to the role. The Thirteenth Doctor is on her way."

Whittaker replaces Peter Capaldi, who became the Twelfth Doctor in 2013 and gives up his role in the show's Christmas special, which airs on BBC America Christmas Day. Capaldi, who told BBC radio in January it was "time to move on," lasted three seasons, as did Matt Smith, who played the Eleventh Doctor from 2010 to 2013.

Caption: Making history: Jodie Whittaker will be the first woman to play the iconic character Doctor Who on the sci-fi hit.