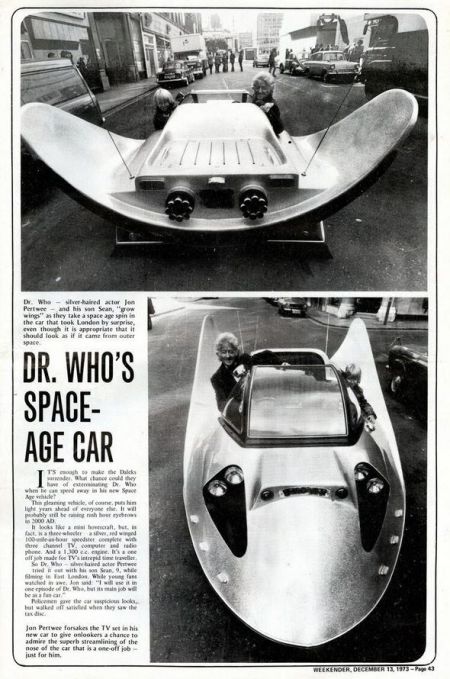 IT'S enough to make the Daleks surrender. What chance could they have of exterminating Dr Who when he can speed away in his new Space Age vehicle?

This gaming vehicle, of course, puts him light years ahead of everyone else. It will probably still being rush hour eyebrows 2000 AD.

It looks like a mini hovercraft, but in fact is a three-wheeler a silver, red winged 100-mile-an-hour speedster complete with three channel TV, computer and radio phone. And a 1,300 cc engine. It's a one off job made for TV's intrepid time traveller

So Dr Who-silver-haired actor Pertwee tried it out with his son Sean, 9. while filming in East London. While young fans watched in awe, Jon said: "I will use it in one episode of Dr. Who, but its main job will be as a fun car."

Policemen gave the car suspicious looks, but walked off satisfied when they saw the tax disc.

Jon Pertwee forsakes the TV set in his new car to give onlookers a chance to admire the superb streamlining of the nose of the car that is a one-off job just for him.

Dr. Who - silver haired actor Jon Pertwee - and his son Sean, grow wings as they take a space age spin in the car that took London by surprise, even though it is appropriate that it should look as if it came from outer space.