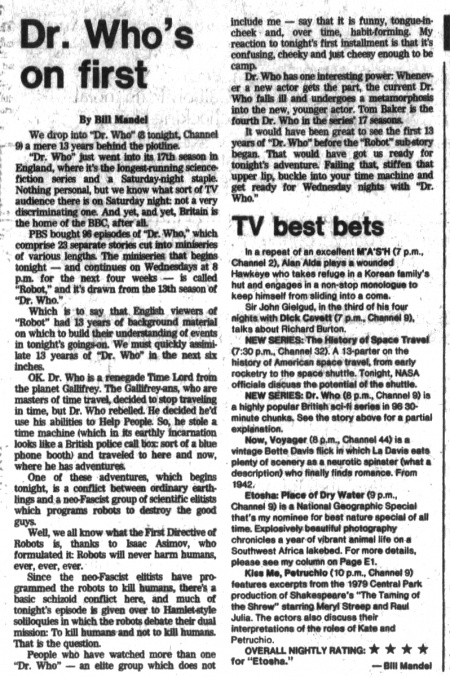 "Dr. Who" just went into its 17th season in England, where it's the longest-running science fiction series and a Saturday-night staple. Nothing personal, but we know what sort of TV audience there is on Saturday night not a very discriminating one. And yet, and yet, Britain is the home of the BBC, after all.

PBS bought 98 episodes of "Dr. Who," which comprise 23 separate stories cut into miniseries of various lengths. The miniseries that begins tonight — and continues on Wednesdays at 8 p.m. for the next four weeks — is called "Robot," and it's drawn from the 13th season of "Dr. Who."

Which is to say that English viewers of "Robot" had 13 years of background material on which to build their understanding of events in tonight's goings-on. We must quickly assimilate 13 yearas of "Dr. Who" in the next six inches.

OK. Dr. Who is a renegade Time Lard from the planet Gallifrey. The Gallifreyans, who are masters of time travel, decided to stop traveling in time, but Dr. Who rebelled. He decided he'd use his abilities to Help People. So, he stole a time machine (which in its earthly incarnation looks like a British police call box: sort of a blue phone booth) and traveled to here and now, where he has adventures.

One of these adventures, which begins tonight, is a conflict between ordinary earthlings and a neo-Fascist group of scientific elitists which programs robots to destroy the good guys.

Well, we all know what the First Directive of Robots is, thanks to Isaac Asimov, who formulated it Robots will never harm humans, ever, ever, ever.

Since the neo-Fascist elitists have programmed the robots to loll humans, there's a basic schizoid conflict here, and much of tonight's episode is given over to Hamlet-style soliloquies in which the robots debate their dual mission: To kill humans and not to kill humans. That is the question.

People who have watched more than one "Dr. Who" — an elite group which does not include me — say that It is funny, tongue-in-cheek and, over time, habit-forming. My reaction to tonight's first installment is that it's confusing, cheeky and just cheesy enough to be camp.

Dr. Who has one interesting power: Whenever a new actor gets the part, the current Dr. Who falls ill and undergoes a metamorphosis into the new, younger actor. Tom Baker is the fourth Dr. Who in the series' 17 seasons.

It would have been great to see the first 13 years of "Dr. Who" before the "Robot" sub-story began. That would have got us ready for tonight's adventure Failing that, stiffen that upper lip, buckle into your time machine and get ready for Wednesday nights with "Dr. Who."

NEW SERIES: Dr. Who (8 p.m., Channel 9) is a highly popular British sci-fi series in 96 30-minute chunks. See the story above for a partial explanation.