Dr. Who's wizardry goes on show 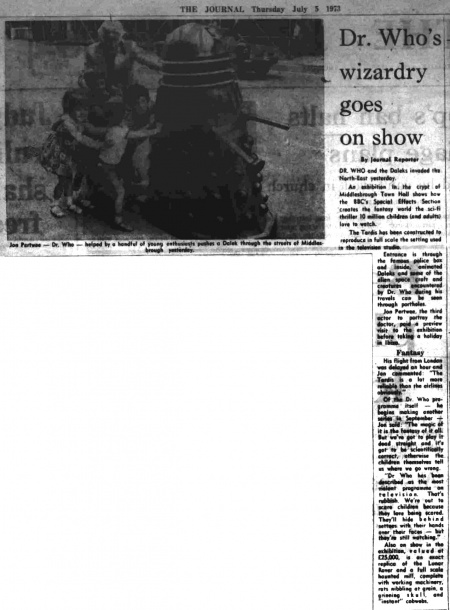 Dr. Who and the Daleks invaded the North-East yesterday.

An exhibition in the crypt of Middlesboro Town Hall shows how the BBC's Special Effect Section creates the fantasy world of the sci-fi thriller 10 million children and adults love to watch.

The TARDIS has been constructed to reproduce in full scale the setting used in the television studio.

Entrance is through the famous police box and inside, animated Daleks and Some of the alien spacecraft and creatures encountered by Dr. Who during his travels can be seen through portholes.

Jon Pertwee, the third actor to portray the doctor, paid a preview visit to the exhibition before taking a holiday in Ibiza.

His flight from London was delayed an hour and Jon commented: "The TARDIS is a lot more reliable than the airlines of obviously."

Of the Dr. Who program itself - he begins making another series and September - Jon said: "The magic of it is the fantasy of it But we've got to play it dead straight and it's got to be scientifically correct, otherwise the children themselves tell us where we go wrong.

"Dr. Who has been described as the most violent program on television. That's rubbish. We're out to scare children because they love being scared. They'll hide behind settees with their hands over their faces - but they're still watching.

Also on show in the exhibition, valued at £25,000, is an exact replica of the Lunar Rover and a full scale haunted miil, complete with working machinery, rats nibbling at grain, a grinning skull, and "instant" cobwebs.

Caption: Jon Pertwee - Dr. Who - helped by a handful of young enthusiasts pushes a Dalek through the streets of Middlesborough yesterday.