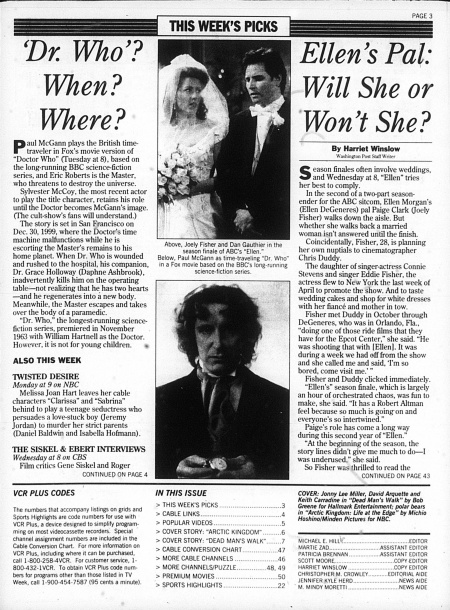 Paul McGann plays the British time-traveler in Fox's movie version of "Doctor Who" (Tuesday at 8), based on the long-running BBC science-fiction series, and Eric Roberts is the Master, who threatens to destroy the universe.

Sylvester McCoy, the most recent actor to play the title character, retains his role until the Doctor becomes McGann's image. (The cult-show's fans will understand.)

The story is set in San Francisco on Dec. 30, 1999, where the Doctor's time machine malfunctions while he is escorting the Master's remains to his home planet. When Dr. Who is wounded and rushed to the hospital, his companion, Dr. Grace Holloway (Daphne Ashbrook), inadvertently kills him on the operating table -- not realizing that he has two hearts -- and he regenerates into a new body. Meanwhile, the Master escapes and takes over the body of a paramedic.

"Dr. Who," the longest-running science-fiction series, premiered in November 1963 with William Hartnell as the Doctor. However, it is not for young children.